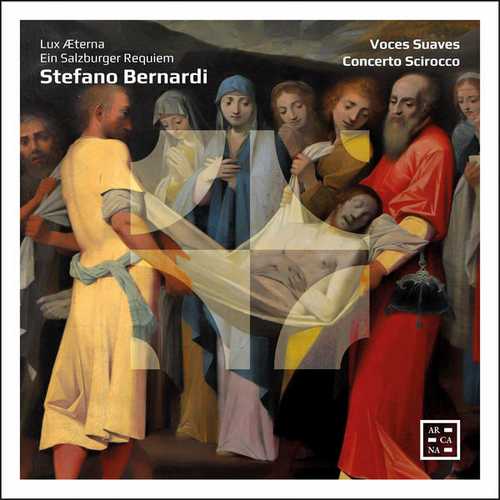 After rediscovering the music of Giovanni Croce, maestro di cappella at St Mark’s cathedral in Venice (A439), Ensembles Voces Suaves & Concerto Scirocco take us to Salzburg and put the spotlight on the Verona-born composer Stefano Bernardi, a contemporary of Monteverdi. Bernardi reached the peak of his career in Salzburg, when he was appointed the first Kapellmeister of its newly constructed cathedral, a position he held from 1628 to 1634. Bernardi contributed greatly to the integration of the Italian nuovo stile in Salzburg, especially of features such as polychorality and the stile concertato, and may therefore be seen as the musical forefather of later, more famous Salzburg musicians. The outstanding stature of his music is clearly evident from his majestic Requiem, the manuscript of which is still preserved in the Salzburg cathedral archives. Particularly impressive is the Sequentia, which forms the core of the work and opens with an elaborate Dies irae section, based on the famous chant melody. The Requiem, as well as a number of Motets by Bernardi, is recorded here for the very first time.