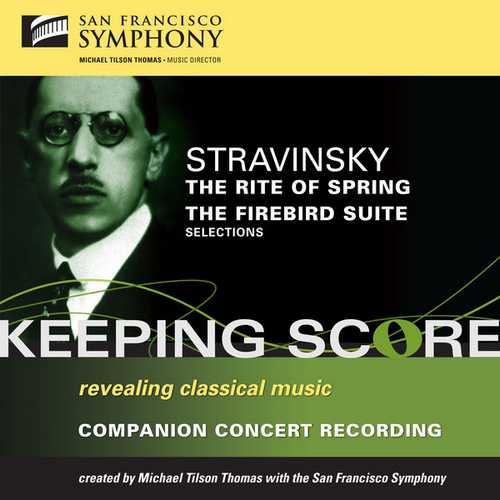 Brilliantly played, efficiently conducted, and effectively recorded, these performances of Stravinsky’s The Rite of Spring and selections from his Firebird Suite lack only one thing to make them successful: excitement. There’s nothing in these scores the San Francisco Symphony cannot execute, from the most challenging solo writing to the most difficult rhythms, and there’s nothing in them that Michael Tilson Thomas cannot masterfully direct, from the convoluted textures that open The Rite to the brutal polyrhythms that close it. But one wants more from a performance of these pieces than merely to be edified and enlightened; one wants to be thrilled, but there are no thrills here. The Firebird’s Infernal Dance is technically irreproachable but emotionally unapproachable, while The Rite’s Sacrificial Dance is technically immaculate but sensually impotent. It’s true that these pieces demand technical perfection and anything less than that (for example, Bernstein’s spectacularly inept recording of The Rite with the Israel Philharmonic), can only be regarded as a failure. But without excitement, even the most technically impressive performances are merely musical exercises.