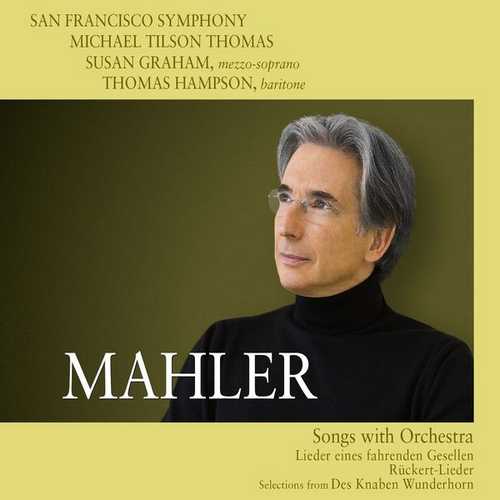 Compared to his expansive, intensely wrought symphonies, Gustav Mahler’s lyrical and picturesque songs are much less frequently performed and recorded, so the appearance of a truly exceptional album is sure to get the attention of devoted fans. Michael Tilson Thomas has released splendid recordings of several of the symphonies, but in this 2010 release he turns his attention to the Lieder eines fahrenden Gesellen, the Rückert-Lieder, and selections from the vocal collection Des Knaben Wunderhorn, which are sung close to perfection by soprano Susan Graham and baritone Thomas Hampson, and accompanied with grace by the extraordinary San Francisco Symphony. Some listeners find these works more accessible and appealing than the symphonies because Mahler’s text settings are focused, evocative, and quite easy to grasp, and the shorter duration of these highly expressive pieces is easier on those who find the symphonies excessively long and long-winded. Tilson Thomas is completely at home in Mahler’s oeuvre, so there really is no discernable difference in the way he handles the orchestra in the songs or the symphonies, and admirers of his work will be impressed with his control and clarity. Graham and Hampson are among the most accomplished singers going, and their warmth and melodic smoothness are wholly appropriate to the gentleness and longing of Mahler’s songs. The live DSD recording on ths SACD is clear and spacious, so a realistic concert sound is re-created.

The release coincides with international celebrations Mahler’s music, as 2010 is the 150th anniversary of his birth, and 2011 marks the 100th year of his death. The SFS and MTT, among the world’s leading interpreters of Mahler’s music, will play a significant role in the global commemoration of Mahler, through concerts, prominent media projects, and extensive international tours. The MTT/SFS Mahler cycle has won seven Grammy Awards, including three for Best Classical Album, and has sold over 140,000 recordings world-wide. This final instalment puts the crowning touch on every collector’s CD shelf.