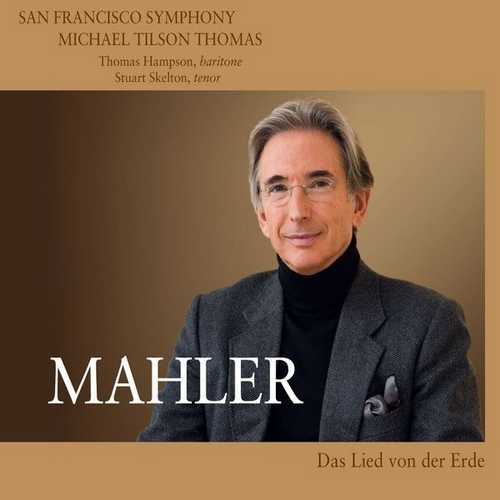 One of today’s most significant recording cycles continues with Michael Tilson Thomas and the San Francisco Symphony offering another instalment in their award-winning cycle of Mahler vocal and orchestral works, this time tackling the exquisite and mysterious Das Lied von der Erde. The project’s uncommon critical and commercial success have brought the exceptional conductor-orchestra partnership two Grammy Awards and numerous citations throughout the world. Every release has entered the Top Ten of the Billboard Classical Chart. MTT has distinguished himself as one of the world’s foremost Mahler interpreters, and through his signature performances, as one of the composer’s most compelling advocates. Recently, his achievements were recognised by The Gramophone who named him Artist of the Year.

Not only the music, but the guests on this recording are also impressive: worldwide famous and always mesmerizing baritone Thomas Hampson and tenor Stuart Skelton (who rose to fame singing the great Wagner and Strauss tenor roles). Most fans will be surprised to see the man doing the lower part – immortalized by great singers, such as Brigitte Fassbaender, Kathleen Ferrier and Christa Ludwig – but it is not uncommon nor the first time on record, and Thomas Hampson certainly has the credentials and experience in this role. Since the project began in 2001, the San Francisco Symphony has recorded eight of the nine Mahler symphonies, Kindertotenlieder and the Adagio from the unfinished Tenth Symphony and due to its commercial, critical acclaim and artistic success of the Mahler recording project, the SFS has expanded it to include all Mahler’s works for voices, chorus and orchestra, including a remastering of their earlier recording of Das klagende Lied.