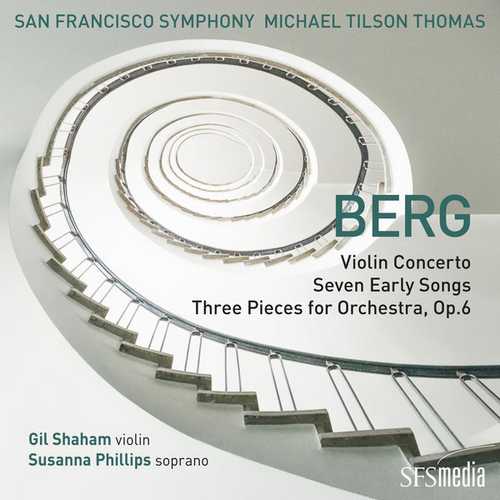 These performances by the San Francisco Symphony under its conductor laureate, Michael Tilson Thomas, were recorded at different times, live at San Francisco’s Davies Hall, between 2015 and 2018, but they cohere nicely into an all-Berg program that succeeds in immersing the listener into the world of this composer. Berg’s Violin Concerto is one of the few 12-tone works that consistently hold the stage, and this is not only because it has tonal elements in the form of Bach quotations but also because its structure is clear. This becomes apparent when it is paired with Berg’s early works, on the edge of tonality or freely atonal, which are thorny things; the supposedly difficult 12-tone system here actually comes as a breath of clarity. The performance of the Violin Concerto by Gil Shaham is deliberate and a bit languid, its slow tempos in keeping with the memorial function of the work, but it is in the Three Pieces for Orchestra, Op. 6, that Tilson Thomas really shines, showing his continuing ability to get the orchestra to punch above its weight and tease out the knotted threads of these intense pieces. As an entr’acte, there is soprano Susanna Phillips in Berg’s Seven Early Songs, lush evocations of turn-of-the-last-century Vienna that deepen the overall effect of an album that adds to Tilson Thomas’ record of accomplishment in retirement and would make a fine introduction to Berg./blockquote>