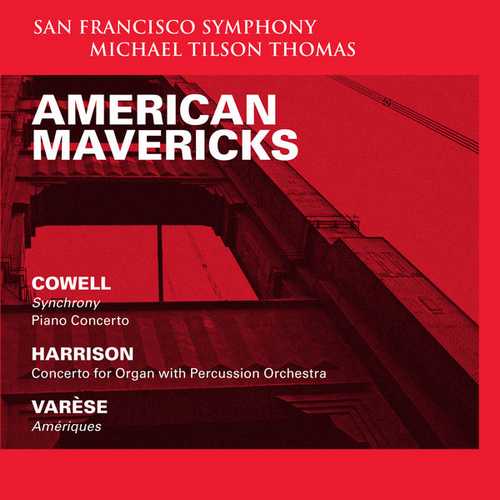 Michael Tilson Thomas’ tribute to three American musical pioneers is a sonic showcase that will impress adventurous listeners with its bigger than life sound. This hybrid SACD features the San Francisco Symphony Orchestra in bold and spacious performances of Henry Cowell’s powerful Synchrony and his even more forceful Piano Concerto, Lou Harrison’s propulsive Concerto for organ with percussion orchestra, and Edgard Varèse’s breathtakingly volatile Amériques. These modernist scores take full advantage of instrumental resources, and the assertively dissonant writing and interplay of dense textures make them challenging to audiences who like a little “bite” in their music. The orchestra plays with tremendous energy and vigor, which make the Cowell and Harrison pieces strident and gritty, while Varèse’s Amériques is rather more lush and vibrant in sound, due to the orchestra’s extraordinarily rich palette of tone colors. Connoisseurs of 20th century avant-garde music will relish this uncompromising program, and anyone exploring the modern masters for the first time would do well to give this exceptional recording a fair hearing.

The latest release from Michael Tilson Thomas and the Grammy® Award-winning San Francisco Symphony features stunning live recordings from their wildly successful American Mavericks festival, a slate of concerts and special events focusing on the compositional voices who created a new American sound for the 20th century and beyond.

Following two weeks of concerts in March 2012 in San Francisco, MTT and SFS took to the road to present these concerts throughout the US, attracting international attention.