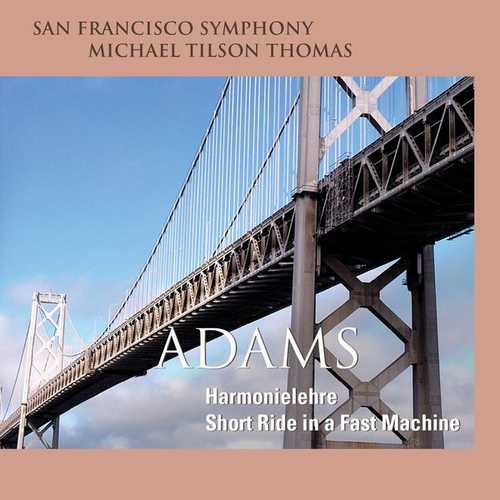 04. Short Ride in a Fast Machine

By 2012, the San Francisco Symphony had played about two dozen of John Adams’ works, about half of them world premiere or U.S. premiere performances, including seven pieces it commissioned, so it has easy claim on the title of being THE orchestra for Adams performances. Adams wrote the massive Harmonielehre for the orchestra while he was its Composer in Residence, and Edo de Waart led the premiere in 1985. This live 2010 performance with Michael Tilson Thomas leading the orchestra marks the 25th anniversary of the piece. This performance is so extraordinarily fine that it would be pointless to quibble over whether or not it surpasses the terrific original recording with de Waart, but it certainly gives it a run for its money, and may for some listeners have an edge. In any case, it is incalculably superior to its only other real competition with Simon Rattle leading the City of Birmingham Symphony Orchestra. The extraordinarily clear, lively sound of SFS Media’s sonically spectacular SACD allows details of orchestration to be heard with fresh brilliance and makes this a version no one who loves the piece will want to be without.

Harmonielehre is an exhausting, exhilarating work in the way a late Romantic symphony can be, and Tilson Thomas masterfully conveys the complex score’s emotional volatility with appropriately startling ferocity. The explosive, pounding chords of the opening of the first movement are viscerally shocking, and Tilson Thomas maintains a sense of the music’s urgency though its extended roller coaster of mood shifts. The second movement, “The Anfortas Wound,” is a ferocious howl of pain and frustration that Adams said characterizes his anguish over the extended period of writer’s block that finally gave way to the composition of Harmonielehre. Tilson Thomas brings catharsis in the shimmering, luminous final movement, “Meister Eckhardt and Quackie.” The orchestra’s playing throughout is superb: absolutely secure technically, with a luscious, vibrant tone, and with the interpretive and idiomatic depth that comes from intimate familiarity with the music. The album includes a sparkling, propulsive reading of Short Ride in a Fast Machine from a live 2011 performance. Highly recommended.