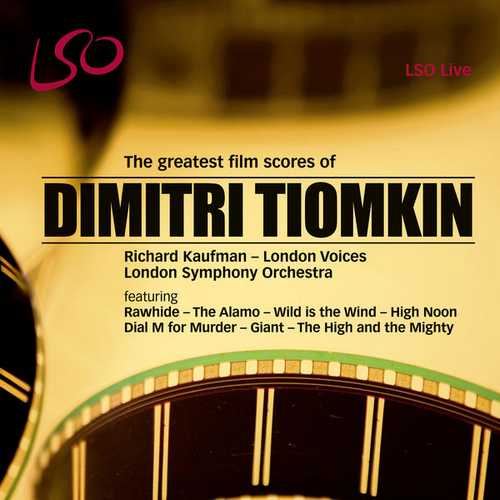 17. Guns of Navarone
18. Search for Paradise

The LSO’s association with the film industry stretches all the way back to Arthur Bliss’s music for ‘Things to Come’, the first time an orchestra had recorded a movie soundtrack. Since then the LSO has recorded music for major blockbusters, including ‘Star Wars’ and ‘Harry Potter’.

Russian-born Tiomkin is one of the most highly regarded Hollywood film composers. A versatile composer who could create memorable scores for almost any story, Tiomkin received a staggering 22 Academy Award nominations, winning four awards. His most famous film scores include ‘High Noon’, ‘The High and the Mighty’, ‘The Alamo’, Hitchcock’s ‘Dial ‘M’ for Murder’ and the theme song for ‘Rawhide’.

He was also a gifted songwriter, writing standards such as the theme from ‘Wild is the Wind’, and ‘High Noon’, which won a Oscar for ‘Best Song’ (‘Do Not Forsake Me’). Tiomkin’s strong ties with the master of suspense, Alfred Hitchcock, resulted in the celebrated film scores for ‘Shadow of a Doubt’, ‘Strangers on a Train’, ‘I Confess’ and ‘Dial ‘M’ for Murder’.