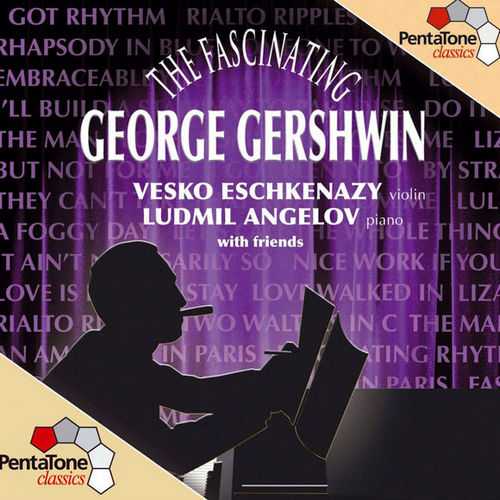 Girl Crazy (version for violin and piano)
06. I Got Rhythm

Girl Crazy (version for violin and piano)
12. Embraceable You

The Fascinating George Gershwin on PentaTone Classics is a recital program fitted together from a mixture of George Gershwin’s popular songs and concert works as rescored for violin and piano. Bulgarian violinist Vesko Eschkenazy is the main culprit, his co-conspirator is pianist Ludmil Angelov, and the third wheel in this project is composer and arranger Bob Zimmerman. This appears to be the first all-violin Gershwin album since the advent of Menhuin and Grappelli Play Gershwin back in 1988.
Gershwin’s only fully authentic work for the combination of violin and piano is Short Story, written for Samuel Dushkin. While the piece is mentioned in Zimmerman’s liner notes, inexplicably it is not included on the disc. Jascha Heifetz’ familiar arrangements of the Preludes (3) are included, and there is an unusual bonus heard at the start of The Fascinating George Gershwin, a reconstruction of an arrangement made by Heifetz of An American in Paris. It is short at just five and a quarter minutes, and does not sound entirely “finished,” but the arrangement is nonetheless “fascinating,” fully justifying the title of this release. The performance of the Lullaby for string quartet, with the added contribution of members from the string section of the Royal Concertgebouw Orchestra, is very nicely realized here.
The rest of the arrangements are by Zimmerman, and the settings of the individual songs, such as Clap yo’ Hands and Someone to Watch Over Me, are good. The two medleys, Triple Tribute and Fantasy in Seven Colors, are not up to the standard of the rest, relying on slapdash transitions between numbers and played in generally leaden tempi. As with all things PentaTone, the Super Audio CD sounds fantastic, although a closer, more intimate perspective on the solo pieces would have been preferable. Gershwin nuts will probably like this, and for a more general audience The Fascinating George Gershwin will provide for a decent, if not great, listening experience.