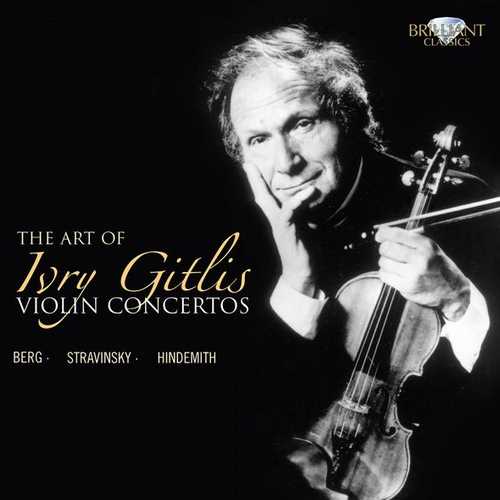 Ivry Gitlis was born in Haifa, Israel in 1922. He gave his first recital when he was just nine years old, and was heard by the great Bronislav Huberman, who recommended that he go to Paris to study at the National Conservatory. He won the Premiere Prix at the age of 13, and went on to study with George Enescu, Jacques Thibaud and Carl Flesch. During the Second World War he moved to London, where he was assigned to the British Army artist branch, giving many concerts for Allied troops.

Gitlis has always been a difficult violinist to categorise – maverick, with an unwillingness to conform, he has cultivated a unique style, and is at home in Wieniawski as he is in Xenakis, on prime time TV shows and in the great recital rooms of the world. He is a devoted champion of new music and has premiered works by Maderna and Xenakis. He is also proud of his appearance on The Rolling Stones album ‘Rock and Roll Circus’. Vox made the recordings on this set in the late 1950s and the 60s. The Berg and Stravinsky concertos won a Grand Prix du Disque, and as well as being highly regarded by fellow musicians, were apparently a favourite of Marilyn Monroe.

‘It seems to me, though I should like to have longer to think about it, that Ivry Gitlis gives the finest performance of both the Bartok works above that I have ever heard’ Gramophone, Bartok, 1955

‘Ivry Gitlis is a technical master, and he brings to both the Bruch and Sibelius concertos an address that stands them in very good stead…The Sibelius relaxes less often; and indeed Gitlis’s attack on it is pursued with an intensity and ferocity that are substantially rewarding in their own right’ Gramophone 1956