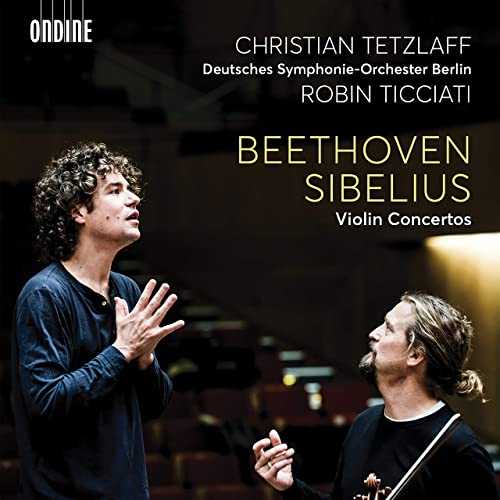 In this new concerto album one of the greatest violinists of our time, Christian Tetzlaff, performs two standard violin concertos in fresh new interpretations together with the Deutsches Symphonie-Orchester Berlin directed by the orchestra’s exciting new music director, Robin Ticciati. Both Ludwig van Beethoven and Jean Sibelius made outstanding contributions to the history of music as great symphonists. Both composers also wrote a violin concerto – Beethoven wrote his D major concerto in 1806, Sibelius his D minor concerto a century later. Although these works do not share much in common in style, both concertos are much more than virtuosic showpieces – it is music with great depth and feeling which has immortalized both composers. Today, these monumental masterpieces by Beethoven and Sibelius are among the most performed concertos by violinists throughout the world. Christian Tetzlaff is considered one of the world’s leading international violinists and maintains a most extensive performing schedule. Musical America named him ‘Instrumentalist of the Year’ in 2005. His recording of the Bartók Violin Concertos (ODE 1317-2) received both Gramophone and ICMA Awards, and the recording was also a finalist for the BBC Music Award in 2019. His recording of the Violin Concertos by Mendelssohn and Schumann, released on Ondine in 2011 (ODE 1195-2), and Bach Sonatas and Partitas released in 2017 (ODE 1299-2D) received the ‘Preis der deutschen Schallplattenkritik’. In addition, in 2015 ICMA awarded Christian Tetzlaff as the ‘Artist of the Year’, and he also received ECHO ‘Instrumentalist of the Year’ award in 2017.