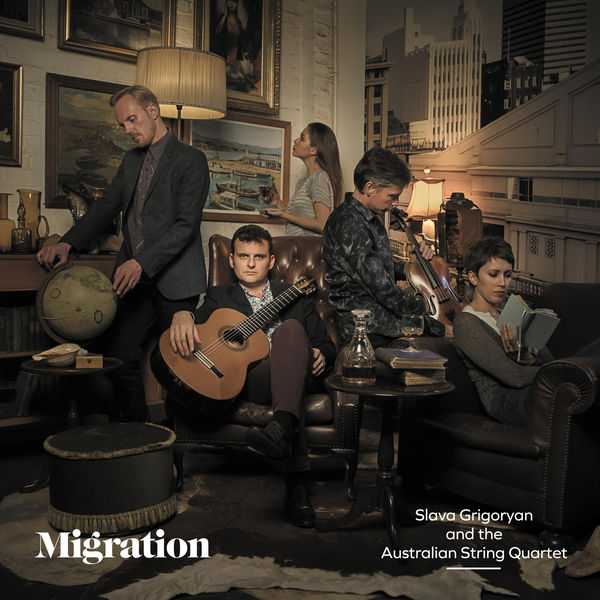 Guitarist Slava Grigoryan joins the Australian String Quartet in three world-premiere recordings, bringing dazzling contemporary voices to the guitar quintet genre first forged in the baroque period. Two of the quintets hail from Grigoryan’s well-established and genre-hopping guitar trio collaboration with Ralph Towner and Wolfgang Muthspiel; the other is penned by Australian Iain Grandage, one of the most original composers of the new generation.

Ralph Towner is a celebrated jazz guitarist and his quintet, Migration, inspired by the wild nature of America’s Pacific Northwest, blends the melodic and harmonic language of jazz with a classical sense of development.

Wolfgang Muthspiel also fuses two different musical genres, drawing on both “the subtleties of classical chamber music and the beauty of groove”. Described as an “interactive web of equal voices”, the work allows each instrument to shine in its own right.

Australian composer, Iain Grandage, also traverses classical, jazz and popular styles in his work. His theatrical flair comes to the fore in this guitar quintet, contemplating the mind’s mystery and complexity in music of kaleidoscopic colour.

Slava Grigoryan has developed an international reputation as a guitarist of rare virtuosity and versatility, performing on stages worldwide and cultivating collaborations with classical orchestras, jazz musicians and world artists, and most notably with his guitarist brother Leonard.

The Australian String Quartet has for over 30 years dedicated itself to musical excellence with an Australian ‘accent’, reaching out from its home at the University of Adelaide’s Elder Conservatorium of Music to audiences globally. The Quartet performs on a matched set of 18th-century Guadagnini instruments, on loan for the Quartet’s exclusive use through the generosity of Ulrike Klein and UKARIA.