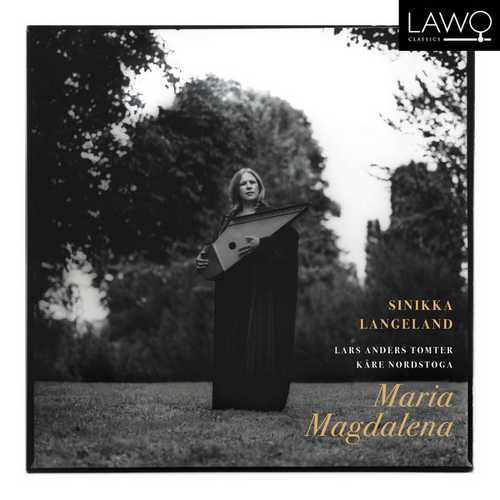 The story of Mary Magdalene has been a source of comfort for many women, and research has shown that medieval ballads about Mary Magdalene are often sung by single mothers. Young women who were outcasts must have found some measure of consolation in the songs about Mary, who bore children with her father, her brother and a priest, but was cleansed of sin after doing penance in the wilderness for many years. But the possibility should not be overlooked that the songs could have been sung with a sarcastic undertone, becoming an unassailable and liberating weapon when there was no other recourse for rebelling against unjust treatment. The Mary Magdalene ballads, found in Solr, Telemark and Gudbrandsdalen, along with other folk tunes and improvisations, form the musical basis of the vocal element, where Sinikka Langeland uses the recitative form to tell the story while surrounded by works of Johann Sebastian Bach.

The instrumental music is meant to intensify the emotions and atmosphere of the story although it is in itself, of course, some of the most beautiful music ever written. Bach/Vivaldis well-known Concerto in G Major, Christ lag in Todesbanden, BWV 718 and Allein Gott in der Hh sei Ehr, BWV 676 are played by Kre Nordstoga on the famous Wagner organ in the Nidaros Cathedral, and Bachs Cello Suite in D Major, BWV 1012 (here in G Major) is played on the viola by Lars Anders Tomter. Langeland also improvises vocally to two of Bachs works. Between the texts that describe Jesus appearing to his disciples after the resurrection, she plays a 15-string kantele.

The recording was made in the Nidaros Cathedral, and represents the continuation of a project of many years standing to place Norwegian religious folk songs side by side with organ chorales by Bach, using the same hymn as a basis. Here Langeland is taking a freer approach, but is still pairing folk songs with works by Bach, as on her earlier recording of songs about the Virgin Mary. Marias song was released by the ECM label in 2009. This new release presents a fascinating and multifaceted portrait of the most prominent woman in the Christian world after the Virgin Mary. SINIKKA LANGELAND SONG/KANTELE Sinikka Langeland was born in Kirkenr, Solr, in 1961, and is one of the most distinctive folk musicians of our time. She has brought the Skogfinn (Forest Finn) culture into focus through her research, reinterpretations and presentations.

She plays the kantele, the Finnish national instrument, but is also known as an interpreter of folk songs such as rune songs and kveding (a traditional vocal technique). After having discovered some folk variants of Kyrie and other religious folk songs, she initiated a long-term project of juxtaposing these with organ chorales and other works by Johann Sebastian Bach that are based on the same hymns. This fascinating combination has resulted in five records, and presents an entirely new musical landscape. She sounds like a whole orchestra with her remarkable vocal and kantele technique, one journalist noted.