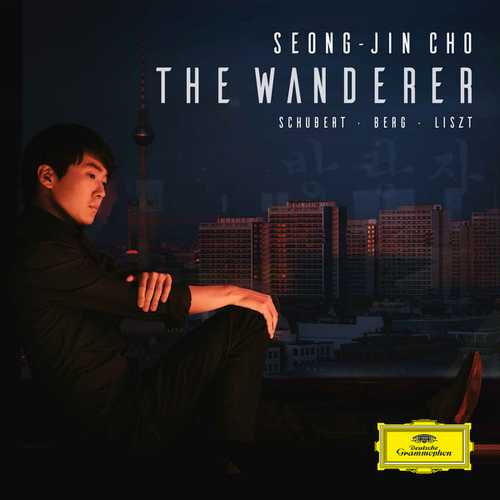 The Romantic theme of the wanderer, the free spirit undertaking a journey into the self, runs through Seong-Jin Cho’s latest solo album. The globetrotting Korean pianist’s programme includes two monuments of the 19th-century repertoire – Schubert’s “Wanderer” Fantasy and Liszt’s Piano Sonata in B minor. Set for international release by Deutsche Grammophon on 3 April 2020, The Wanderer also contains Alban Berg’s Piano Sonata Op. 1, a single-movement work of extraordinary intensity.

All three compositions grow from a simple theme or melodic gesture which is then transformed in the course of a voyage of variation, development and discovery. “This music looks forwards and backwards at once,” notes Seong-Jin Cho. “What fascinates me is the composers’ ability to create great art from just a few elements. The way they develop the work’s entire fabric from a single motif is fascinating. What creativity! What imagination!”

The Fantasie in C major D760, known as the “Wanderer” Fantasy because it quotes from the composer’s eponymous song Der Wanderer, dates from 1822. The four-movement work’s invention, emotional range and technical challenges make enormous demands on its performers. “The emphasis should fall on the second word of the title,” says Cho. “The work deals above all with fantasy, with the imagination, and thus with artistic license.”

Liszt’s B minor Sonata, completed in 1853 and dedicated to Robert Schumann, shocked many early audiences with its symphonic scale and revolutionary single-movement form. “It deals with life, love and death, with Mephistopheles and Faust,” Seong-Jin Cho comments. “I see these thirty minutes of music as a life cycle, with the climax in the middle. Playing Liszt is like entering a state of ecstasy.” Berg’s Piano Sonata, also in B minor, grew from sketches made while he was studying composition with Arnold Schoenberg and was finished in 1909. Cho first discovered the work as a teenager thanks to Glenn Gould’s recording, and went on to study its form and content in depth. “Every detail is magnificently worked out,” he notes; “there are echoes of Wagner, references to Beethoven’s manner, and even to French Impressionism.”

Since winning the International Chopin Piano Competition in 2015, one of the most prestigious of all prizes for young artists, Seong-Jin Cho has become a regular at the world’s leading concert halls. His Deutsche Grammophon debut album, released within days of his Chopin Competition victory, shot to No.1 in South Korea’s pop album chart and set the foundations for his present superstar status in Asia. The Wanderer follows critically acclaimed recordings of works by Mozart and Debussy, the latter praised by the Daily Telegraph for catching “that special Debussyan combination of grandeur and quicksilver lightness and sudden passion”.

Cho moved to Europe eight years ago to study with Michel Béroff at the Paris Conservatoire and has lived in Berlin since 2017. As an artist in high demand worldwide, however, he is comfortable with the itinerant life of a concert pianist. “My home is wherever I happen to be,” he says. “Sometimes after I finish my concerts, if I have time, I go to a museum. I also love to take public transport, the bus or tram, or walk around, discover the local architecture and go to places like cafés and bars to have a coffee or a beer, watch people and feel the atmosphere. But I crave silence too and, just like Schubert, need to take short retreats into the natural world to recharge my batteries and refresh my spirit.”