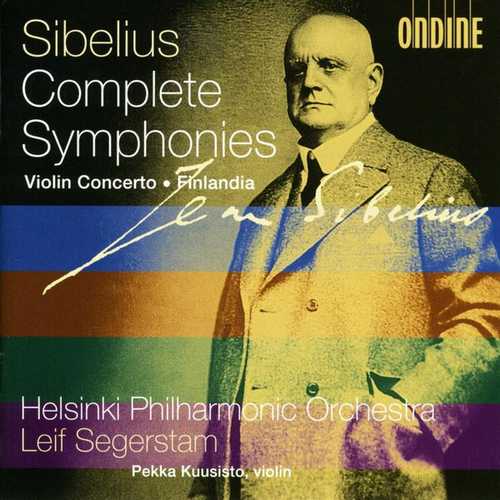 Marking the 140th anniversary of the birth of Finland’s greatest composer, Jean Sibelius, Ondine releases an elegant set of four CDs containing all seven symphonies, Finlandia, and the Violin Concerto.

These Sibelius recordings have received rave reviews throughout the international press. Symphony No. 7 was an Editor’s Choice in The Gramophone.

These four discs collect Leif Segerstam’s second cycle of the symphonies of Sibelius. First issued by Ondine in the early years of the 21st century as separate discs filled out with symphonic poems, the symphonies are here condensed into a cold, hard block of eternity. Segerstam’s first Sibelius cycle for Chandos in the early Nineties aimed both barrels at eternity, but with the Danish Radio Symphony Orchestra’s colorful and dedicated but sometimes too cheerful playing, he didn’t always hit it. But back home in Finland with the even more dedicated but more darkly colored and wholly idiomatic playing of the Helsinki Philharmonic Orchestra, Segerstam nails eternity every time. The Helsinki musicians have Sibelius’ music in their blood, and their playing is strong, sure and absolutely authentic, while Segerstam, a composer as well as a conductor, creates as much as re-creates the scores in his interpretations.

In their heroic First’s tragic Finale, in their dramatic Second’s harrowing Tempo andante, ma rubato, in their bucolic Third’s crepuscular Andantino con moto, quasi allegretto, in the radiant Fifth’s turn to the minor before the Allegro molto’s final peroration, in the pastoral Sixth’s despairing Allegro molto, in the enigmatic Seventh’s roaring developments and especially in all of the baleful Fourth’s aggressive nihilism, Segerstam and the Helsinki express the sense of eternity which is at the heart of Sibelius’ symphonic art. The couplings of Finlandia performed with the fervent and muscular Polytech Male Choir of Helsinki and of the Violin Concerto performed with the passionate and robust Pekka Kuusisto are fine additions to the set, but it is Segerstam and the Helsinki’s symphonies which will keep Sibelius’ devotees coming back.