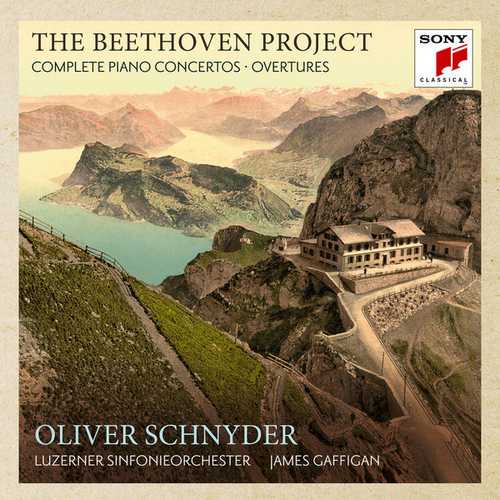 Sony Classical is delighted to bring you the latest album from the sensational pianist, Oliver Schnyder, featuring a selection of Ludwig van Beethoven’s greatest works including his complete piano concertos and selected overtures. Dubbed the “piano poet” and with over 12,000 fans on Facebook alone, Schynder’s aesthetic approach is compared with that of the great pianists Kempff, Schnabel, Fischer and Barenboim. Ludwig van Beethoven stands for independence of mind, for revolutionary ideas, for music that reaches far beyond his own time. The year 2020 marks the 250th anniversary of the composer’s birth. The Lucerne Symphony Orchestra with its chief conductor James Gaffigan took this as an occasion to realize the “Beethoven Project.” The result is this truly landmark recording featuring all of his remarkable piano concertos and a selection of his most famous overtures. Oliver appears in the most important concert venues in Europe, North America and Asia such as Wigmore Hall, Concertgebouw, Kölner Philharmonie, Herkulessaal and Carnegie Hall. His chamber music collaboration with violinist Andreas Janke and with the cellist Benjamin Nyffenegger led in 2012 to the founding of the Oliver Schnyder Trio. In 2016, Schnyder was awarded a prestigious Werkbeitrag by the Aargauer Kuratorium. James Gaffigan, Chief Conductor – Hailed for the natural ease of his conducting and the compelling insight of his musicianship, James Gaffigan continues to attract international attention and is one of the most outstanding American conductors working today. Gaffigan also holds positions as Principal Guest Conductor of the Netherlands Radio Philharmonic Orchestra and was appointed the first Principal Guest Conductor of the Gürzenich Orchestra, Cologne in September 2013, a position that was created for him. Luzerner Sinfonieorchester – Orchestra-in-residence of the renowned KKL Luzern. As Switzerland’s oldest symphony orchestra (founded in 1806), it has gained an international standing that extends far beyond its home territory. Strongly anchored in Lucerne, a city with a worldwide reputation for music, the orchestra offers a number of annual concert cycles and organizes the Zaubersee Festival – Russian Music Lucerne. It also acts as the opera orchestra of the Lucerne Theatre.