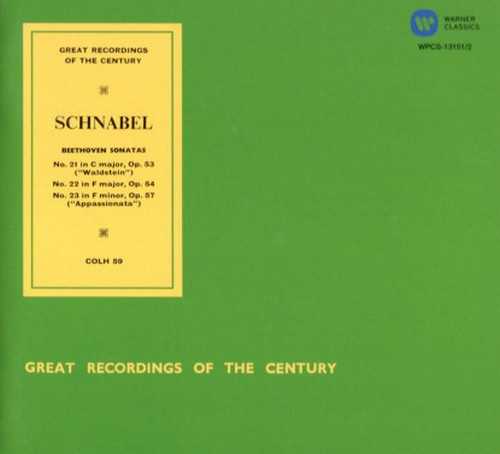 These recordings were inducted into the Grammy Hall of Fame in 1975 & into the National Recording Registry of the Library of Congress in 2018.

One of the towering classics of the gramophone. These are virtuoso readings that demonstrate a blazing interpretative vision as well as a breathtaking manner of execution.
~ Gramophone

There was not then & there is not now a more profound interpreter of the piano sonatas of Ludwig van Beethoven than Artur Schnabel, & his 1930s recordings of them are now as they have always been & as they will always be the greatest recordings of the works ever made. Schnabel’s Waldstein Sonata is pure joy, his Appassionata is dark despair, & his Sonata in E minor is complete consolation. Schnabel’s Sonata in E major is radiant bliss, his Sonata in A flat is luminous ecstasy, & his Sonata in C minor is numinous spirituality. Generations of critics have carped at Schnabel’s technique &, in truth, he does lack the technique to play the closing movement of the Appassionata at tempo. But generations of listeners have heard Schnabel’s deep soul & his sublime musicianship & have therefore cheerfully disregarded any critical quibbles in gratitude for Schnabel’s transcendent performances. EMI’s remastering of the 1930s monaural originals is obviously antique but nevertheless clear enough to let the lucid light of Schnabel’s performances shine through. Anyone who values their immortal soul should listen to these recordings.
~ AllMusic

EMI has introduced music-lovers to many recording premieres over the years. Especially significant is Artur Schnabel making the 1st ever recording of the complete Beethoven sonatas. Schnabel’s recordings, made 1932-35 in Studio No. 3, Abbey Road, London, remain classics of the gramophone era. This double set is a compilation that EMI judge to be the finest of them. The label asserts that Schnabel’s recording of the ‘Waldstein’ is 1 of the greatest Beethoven recordings of all time & that his performances of the last 3 piano sonatas are “visionary readings”.

Artur Schnabel was born in 1882, in Lipnik, Moravia, a village on the Austrian-Polish border, then part of Austria. The family moved to Vienna when he was 7 & as a child prodigy on the piano he studied privately with Hans Schmitt (1888-91) & with the renowned Polish pianist Theodor Leschetizky (1891-97). Schnabel is reputed to have known Brahms & had even studied with him. Although I am unsure just how accurate this information is, it is a pleasant thought. In 1900 he settled in Berlin, then a growing centre for music, making the city his home for 33 years. Between 1925 & 1933 he joined the faculty of the Berlin State Academy. Owing to the dangerous situation for European Jews with the advance of National Socialism in Germany, he left Berlin in 1933 & lived for a time in England & Italy. In 1938 he settled in USA where he became a citizen in 1944. Schnabel died in 1951 at Axenstein, Switzerland.

In addition to his talents as a virtuoso pianist Schnabel was a renowned teacher, author & also a composer. He wrote in many genres, including 3 symphonies & a body of chamber & instrumental music. Biographer Mark Satola writes that between the years 1919 & 1924, when he withdrew from the concert hall, his composing activities were the happiest days of his life. Schnabel’s reputation principally rests on his dynamic & legendary interpretations & editions of the piano works of Beethoven. In January & February 1927, to mark the centenary of Beethoven’s death, he performed all of Beethoven’s 32 piano sonatas at the Berlin Volksbühne; a feat that had not previously been undertaken. Between January & April 1933 he again performed the piano sonatas at the Berlin Philharmonie.

On the present issue the 9 chosen piano sonatas are presented in chronological order. On the 1st disc Schnabel commences the programme with the ‘Waldstein’ from Beethoven’s middle period. One immediately feels the ‘electric’ atmosphere right from the opening bars. Tempestuousness is combined with serenity across the grandeur of the music. In the 2 movement Sonata No. 22 I was impressed with the machine gun-like staccato notes in the unusual opening minuetto. Schnabel leaves one feeling drained from the breathless nature of his playing in the allegretto. In the challenging ‘Appassionata’ Schnabel plays with imagination & high drama. In the final allegro ma non troppo – presto one can imagine being in the midst of a chilling & ferocious storm. The 2 movement Sonata No. 24 in F sharp major was evidently a favourite of Beethoven, & Schnabel is stunning, providing a reading of rapt intimacy in this concise score. Sometimes referred to as a ‘Sonatina’ the Sonata No. 25 is given an interpretation of fluidity & vivacity in the outer movements with a deep sadness in the central andante espressivo.

The 2nd disc opens with the 2 movement Sonata No. 27 in E minor. Schnabel is dramatic & extrovert in the opening movement & the Mendelssohn-like allegretto is evocative of lullabies in a children’s nursery. In the Sonata No. 30 light work is made of the difficulties with the alternating quick & slow passages. The lengthy closing movement theme & variations is given a sublime & masterly interpretation. Schnabel is impressively calming in the opening movement of the Sonata No. 31 & sparkling & capricious in the short Schumannesque central movement. He admirably catches the deeply introspective character of the final movement. The release concludes with the 2 movement Sonata No. 32 which was Beethoven’s last work in the genre. Here Schnabel imperiously interprets both the vigorous & meditative moods of the score.

Notwithstanding the age of some of the original recordings I have not been unanimously impressed with the effectiveness of the remastering undertaken across some of the releases in the Legendary Series. The present recordings have been cleaned up extremely successfully & they sound remarkable for their nearly 90 years.

These interpretations are imperious and this is certainly 1 of the legendary great recordings of the century. Beethoven lovers & those who are fascinated by historical recordings from the greatest performers will be in their element with this issue.