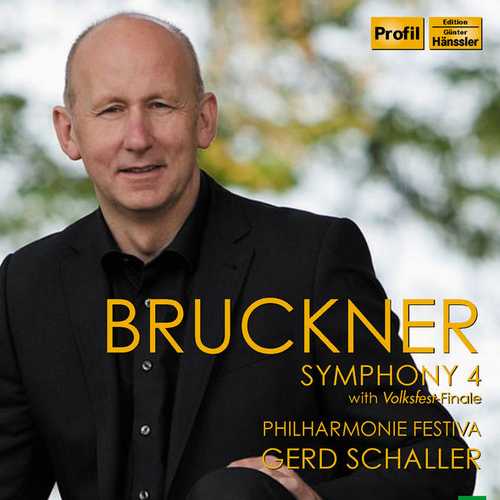 For this 2013 live recording of Anton Bruckner’s Symphony No. 4 in E flat major, “Romantic,” Gerd Schaller has chosen William Carragan’s edition of the 1878 version with the seldom-played Volkfest-Finale, which is the first of the composer’s numerous revisions to depart drastically from the original 1874 version. To the extent that the first three movements resemble all later versions, listeners will certainly recognize this as a standard performance of the “Romantic,” though in content and form the Finale is quite unusual and decidedly inferior to the revised Finale from 1881. Including this formative version shows some curiosity on Schaller’s part, and students of the symphony’s checkered history will likely value this recording for that reason. But most listeners will judge it on the strength of the playing and the remarkable sound quality, which is first-rate for a concert recording. Schaller draws clean sonorities and vibrant harmonies from the Philharmonie Festiva, and the music is played with close attention to details, conviction, and great warmth. The orchestra has clean separation of parts and transparent textures, and Profil’s reproduction is extraordinary, even by their high standards.

Bruckner completed the score of the Third Symphony on the night of New Year’s Eve 1873, and directly began working on the sketches for the first movement of the Fourth on January 2 1974. He completed it after eleven months ‘at about half-past eight in the evening’ of November 22, 1874. Yet ‘completed’ was often a relative state in Bruckner’s case. In 1878 he created a second version, replacing the scherzo with a new one, the Hunting Scherzo, and composing a new final movement with the title Volksfest (traditional fair). The Volksfest is consequently the original final movement of the second version. The next revision of 1880, later edited prior to publication, represented a completely new final movement. Together with the first three movements of the second version, this finale of 1880 formed the final version, which was published in November 1889 after renewed revision. Bruckner himself called the Fourth his ‘Romantic’ symphony, making it the only one to have a name. The present recording is based on the edition of Prof. William Carragan, which is oriented towards the Nowak Edition. It is shorter and much catchier than the version performed normally. The strings have the upper hand here instead of the brass, but the four horns do resurface with reminiscences of the first movement.