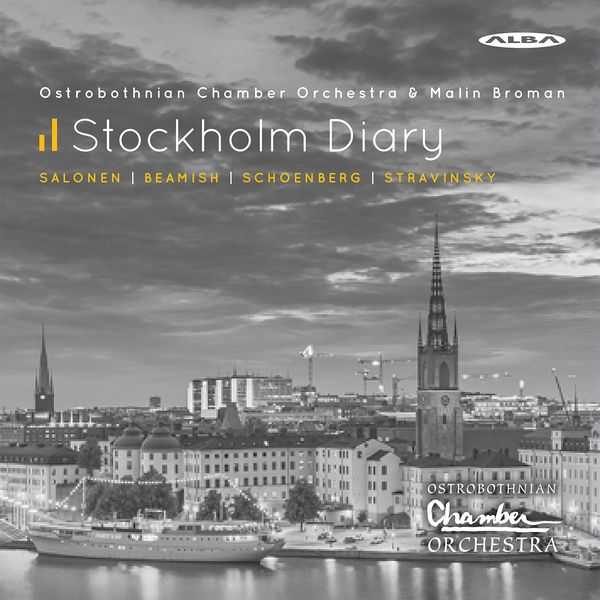 It is with pleasure and pride that Malin Broman and the Ostrobothnian Chamber Orchestra present their first recording together. The path to fruition has been longer than expected: it took a whole year of pandemic diversions before they were finally able to record Stockholm Diary. However, the genesis came long before. Esa-Pekka Salonen’s Stockholm Diary has been a hit for many years. Written for SNYKO but not yet recorded this was an obvious opportunity to make a recorded version. Not only that but the the piece is a perfect symbol for the collaboration or even symbiosis between Malin Broman and Ostrobothnian Chamber Orchestra, Sweden and Finland.

Malin Broman and the Ostrobothnian Chamber Orchestra had also particularly enjoyed working with Verklärte Nacht, drawing on inspiration from Dehmel’s text as well as both the orchestral and sextet versions of the piece. Hopefully you will also been sucked in to world of Schönbergs moonlit lovers and their physical and emotional journey through the night.

Apparently Sally Beamish also fell under the spell of Verklärte Nacht when she wrote Glanz – a fascinating addition to the repertoire and one which could have led us to name the album “LA Diary”: Salonen, Schönberg, Beamish and Stravinsky have all been greatly affected by transfigurative time spent in LA and the album can also be seen as a secret greeting from across the Atlantic – exactly as music and culture inspires to be – free from boundaries.

Celebrating its 50th anniversary, the Ostrobothnia Chamber Orchestra and its artistic director Malin Broman have released their first joint album. Stockholm Diary includes Arnold Schönberg’s cult work Verklärte Nacht as well as premiere recording of Esa-Pekka Salonen’s ‘Stockholm Diary’. The Ostrobothnia Chamber Orchestra is conducted by Malin Broman, a Swedish violinist who is also the violin and viola soloist on the album. The unifying factor in the album is not only Schönberg’s work Verklärte Nacht, but also the city of Los Angeles. ‘The composers of the album, Schönberg, Salonen and Stravinsky, have all been in Los Angeles at some point, so the name of the album could just as well have been LA Diary,’ laughs Malin Broman.