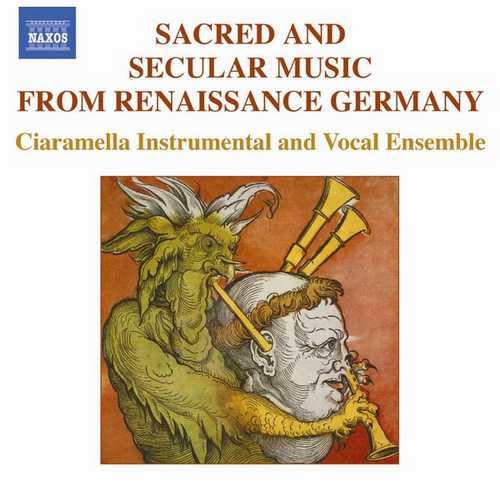 The cover blurb for this release by the Cleveland, OH, early music ensemble Ciaramella quotes a critic who praises the musicians for their ability to play “with the ease of jazz musicians improvising on a theme.” The comment is especially apt for this disc of German Renaissance music, commercially speaking the poor stepchild of the era compared with English, Italian, and even French music. For the German Renaissance world was full of individual musicians and ensembles who elaborated on preexisting models, much as a jazz musician would. The music they made is only incompletely preserved in manuscripts of the era. Such anthologies as the Buxheim Organ Book and various instrumental ensemble collections are full of imaginative instrumental treatments of tunes imported from somewhere else, and this disc (of essentially scholarly origin, but not a bit less musical for it) gives a good idea of what went on. Give a listen to the three different versions of Dufay’s chanson Se la face ay pale (If my face is pale, tracks 2-4), two for organ, and one for the combination of shawms, slide trumpet, and sackbut; each treats the original in a different way. The disc, alternating pieces played on the organ with recorder-dominated settings and those for the louder shawm and trumpet, also introduces the listener to the distinct but overlapping categories of loud or “alta” and quiet or “bassa” instruments and groupings, the former likely intended for outdoor performance. There are also a few vocal pieces, and a few conventionally vocal pieces performed instrumentally — that boundary was porous, too. And finally there was the tendency, especially strong in German lands, to traverse the line between sacred and secular, even within the limits of a single piece (such as Wer ich ein Falck, track 7). The playing is very tight, and the program constantly takes turns that illuminate the nature of the repertoire (hear the unexpected instrumental versions of movements from Isaac’s Missa je ne fais plus, tracks 8-9) without ever becoming merely didactic — the album is varied and enjoyable throughout. Highly listenable on its own terms, this album will also deepen the understanding of any Renaissance music lover, and it marks a new level of accomplishment for musicians from the somewhat Renaissance-deprived American interior.