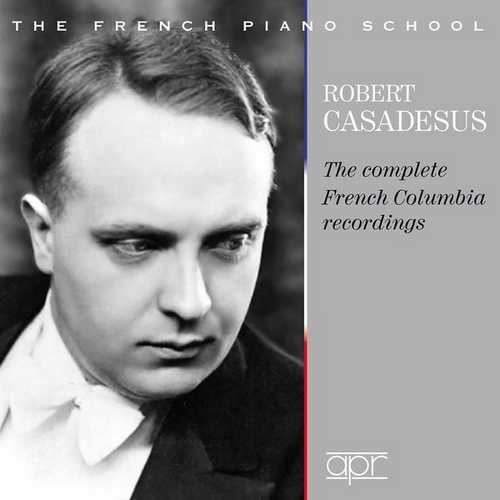 Robert Casadesus (1899-1972) is today almost considered an American pianist – he based himself there from the Second World War onwards and he is known today through the huge number of recordings he made for US Columbia from 1940 until his death, but as a musician and pianist he was French to the core. He had studied at the Paris conservatoire with Isidor Philipp and Louis Diémer and his combination of immaculate technique, a light and brilliant touch and the refined elegance of his interpretations reveal why he was considered one of the greatest French pianists of the century. Casadesus began his recording career for French Columbia in 1928 and all his recordings for that label, until he left for the USA, are included here for the first time. Particularly noteworthy is a previously unpublished studio recording of Mozart’s ‘Coronation’ concerto. He excelled in Mozart and Chopin and in French repertoire and all are well-represented in this collection. There are also noteworthy chamber collaborations in the Debussy cello sonata and Fauré Piano Quartet.

Playing with clarity and a refined touch: these were recurring themes of descriptions of the subtle art of the French pianist Robert Casadesus (1899-1972). The label APR has chosen a most opportune movement to restore all the recordings that he made in the inter-war years for Columbia, from 1928 and 1939. The work was done with great care, removing surface noise without impairing the quality of the initial recording.
This publication is a goldmine for anyone who only knows Casadesus from his later recordings: here we can hear a man in the full bloom of youth. What a treat are these eleven finely-chiselled Sonatas by Scarlatti, for example: their dazzling volubility and virtuosity leave us flabbergasted. Once again, we can only admire the freedom of the pianists of the era, their sense of colour and their choices of incredibly rapid tempos. The programme, which runs to four records is as varied as it is copious, offering works from the “great repertoire” (Scarlatti, two Mozart Concertos, Beethoven, Schumann, Chopin’s Four Ballades), but also rare pearls that we discover or return to with pleasure, such as the delicate symphonic poem with piano, Mon Lac (inspired by the lake Paladru in the Isère) by that inimitable organiser of Lyon’s musical life, Georges Martin Witkowski – a piece that Casadesus loved to play; the Sonata for Cello and Piano by Debussy with Maurice Maréchal; Fauré’s Piano Quartet No. 1 with the legendary Calvet Quartet; and indeed the Sonata for Flute and Piano by Casadesus himself, which he plays with René Le Roy. This anthology revives a pianist who was much-loved in his day, both at home in France and around the world and especially in the United States.