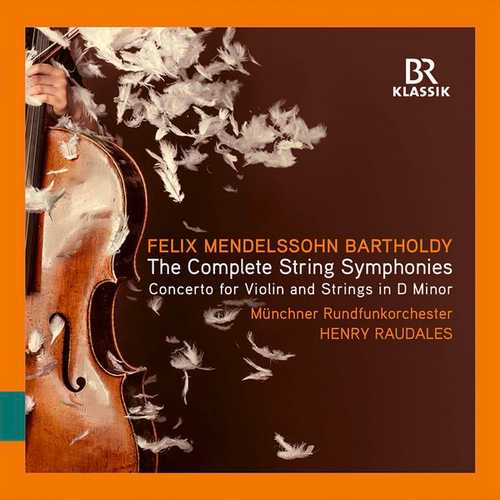 It would be fascinating to know what Mendelssohn would have to say about the release into the public domain of the twelve String Symphonies he began to compose from 1821, when just on the cusp of his teens. Although one could hazard a pretty accurate guess that he’d be unamused. Collated in a carefully dated exercise book, these were thoroughly private exercises in the symphonic craft, never intended for publication, and road-tested equally behind closed doors on the chamber orchestra that met at his parents’ Berlin salon. And that’s precisely what they sound like, too – full of the light-footed, Classical-inspired elegance we associate with Mendelssohn, but with the first six in particular sounding less like Mendelssohn, and more like what Carl Philipp Emanuel Bach might have come up with on one of his less wild-child days. Ditto for the Violin Concerto in D minor he composed around the same period for his violin teacher, Eduard Rietz. All of which is to say that they constitute a risk for any ensemble wishing to take them on, because while on the one hand they’re charming and sometimes fascinating works (especially towards the end of the set), they’re also abundantly ripe with the potential to sound as dull as ditchwater. Happily though, they’ve come out very well indeed under the fingers of the Münchner Rundfunkorchester and its leader Henry Raudales.

Studio recorded in an ample (but not overly so) acoustic, this offering is a repackaging of the orchestra’s 2019 release featuring the first six symphonies paired with the Violin Concerto, to which have now been added the final six symphonies plus the Sinfoniesatz in C minor Mendelssohn then replaced a few months later with the full-orchestra Symphony No. 1.

That 2019 release had given us fresh, crisp, daintily elegant and light readings of the symphonies, but its star attraction had undoubtedly been the concerto, Raudales singing its solo lines with crisp, neat, lithe elegance, supported by equally neat, bright, light and fun-filled orchestral playing. Those same qualities have been similarly lavished on the second half of the set, while capitalising on the flashes of additional interest Mendelssohn’s gradually developing voice is now beginning to throw up as he graduates from three to four movements, and introduces his first Scherzo. Take how gracefully they nail the mysterious, time-standing-still, misty romance of No. 11’s opening Adagio as Mendelssohn begins to flex the programmatic voice that would later give us works such as ”The Hebrides” Overture; or the deliciously stringy luminosity with which they romp through its Commodo Schweizerlied Scherzo, Raudales delivering its solo with top-tapping perkiness; or the way in which, in the ensuing Adagio’s opening, they bring out its brief, uncanny resemblance to the later Calm Sea and Prosperous Voyage overture. Also to be appreciated is the overall warmth to their tone.

If you’re interested in tracing the development of Mendelssohn’s symphonic voice, you won’t go wrong with these.

This CD box set from BR-KLASSIK combines Mendelssohn’s twelve string symphonies, his ‘Symphoniesatz’ in C minor (No. 13) and his early violin concerto in D minor in the form of studio recordings made by the Münchner Rundfunkorchester under its leader Henry Raudales. The violinist has won several awards and made numerous recordings with the orchestra as a conductor and soloist. It was thanks to his father’s penchant for organizing musical concerts in his family’s Berlin apartment on Sunday mornings that the 11-year-old Felix Mendelssohn began to compose quite a long series of string symphonies, and also that the works were initially performed. The study of music and composition spurred the young composer on greatly; his diligence as well as his youthful creativity developed early, and he made astonishing progress. In 1821, he wrote the first half of his string symphonies, which together took less than two years to complete. During performances that formed part of the concerts at home, he always took over the direction of the chamber orchestra, which consisted of amateur and professional musicians from the Berlin court orchestra. Mendelssohn’s early concerto for violin and string orchestra, written at around the same time for his violin teacher Eduard Rietz, was probably played in the same setting. Formally, it owes much to the concertos of Johann Sebastian Bach, but it clearly sounds like Mendelssohn.