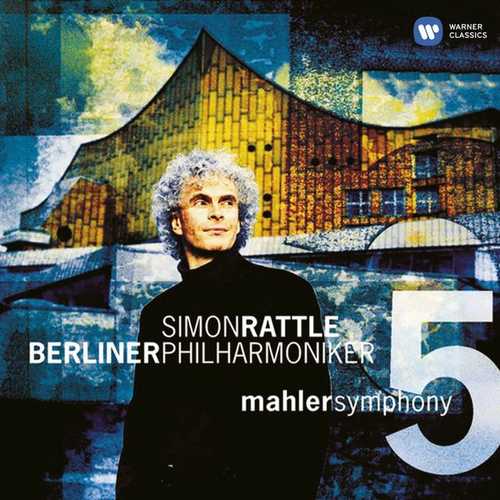 Mahler’s Fifth is a terror to bring off but, brought off, is a joy beyond measure. It made a fine nuptial offering for Rattle and the Berliners on 7 September 2002 – festive yet challenging, a tragi-comic revel and a high-wire act to boot.

‘The individual parts are so difficult,’ wrote Mahler, ‘they call for the most accomplished soloists.’ Rattle brought the prodigious first horn to the apron of the stage for his obbligato contribution in the Scherzo. Mengelberg’s conducting score, which Mahler used for the work’s Amsterdam premiere in 1906, has an annotation to this effect, and the practice was followed at Orchestral Mahler 698 the work’s English premiere in 1945, but we’re left wondering what would have happened if Rattle hadn’t brought the player forward. EMI’s recording is splendidly explicit, but the horn section, which plays a crucial role at key moments, seems oddly distant on CD.

The tutti sound Rattle draws from the orchestra is clean and sharply profiled, not unlike the Mahler sound Rafael Kubelík tended to favour.

Rattle’s tempo for the Adagietto is a good one by modern standards (not too slow) and the string playing has a lovely diaphanous quality, but you may find the playing over-nuanced.

Nowadays it isn’t unusual to hear rhythm and line sacrificed to detail and nuance as old-established symphony orchestras are made to rethink their readings by conductors schooled in the arcana of ancient performance practice. Rattle has done his fair share of this. What’s interesting about this live Mahler Fifth is the degree to which the detail is absorbed and the line maintained.

Like most latter-day conductors, Rattle tends to underplay the march element in the first movement. Mahler in his 1905 piano roll, Walter, and Haitink in his superb 1969 Concertgebouw recording all preserve this. Some may find the approach too dry-eyed in the longdrawn string threnody at figure 2. But an excess of feeling can damage both opening movements (the second is a mirror of the first) if the larger rhythm is obscured. Rattle, like Barbirolli and Bernstein in his superb Vienna Philharmonic recording, treats the threnody more as a meditation than a march, but the pulse isn’t lost and the attendant tempos are good. The frenzied B flat minor Trio is particularly well judged. The second movement is superb (the diminished horn contribution notwithstanding) and none but the most determined sceptic could fail to thrill to the sense of adventure and well-being Rattle and his players bring to the Scherzo and finale, even if Barbirolli (studio) and Bernstein (live) both reach the finishing line in rather more eloquent and orderly fashion that this talented but still occasionally fragile-sounding Berlin ensemble.

As a memento, the CD is a triumph of organisation and despatch. As a performance and as a recording, it has rather more character and bite than Abbado’s much admired 1993 Berlin version.

Indeed, it can safely be ranked among the half dozen or so finest performances on record. It isn’t perfect, but do you know of one that is?