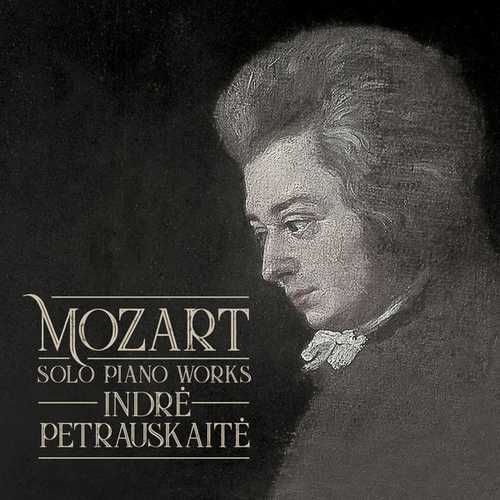 The nine works offered here represent a fraction of the composer’s overall oeuvre, yet they span a gamut of genres including improvisatory and emotional fantasies, enigmatic miniatures and complex sonatas. Indre showcases these pieces much loved staples of stage and studio alike in a novel and stunning album.

Indre Petrauskaite finished her graduate and postgraduate studies at the Lithuanian Academy of Music. In 2000, she entered the Royal Academy of Music in London, where she studied with Profs Christopher Elton, Petras Geniusas and Alexander Satz and completed her Postgraduate Diploma and Master of Music Degree with a DipRAM. During her studies, she participated in master classes with such musicians as Esther Yellin, Peter Frankl, Michael Roll, John O’Conor, Ferenc Rados, Robert Levin, Boris Berman, Emanuel Krasovsky, Leif Ove Andsnes and Paul Lewis.

Indre has performed with the Lithuanian National Symphony Orchestra, Lithuanian State Symphony, Lithuanian Chamber Orchestra, Latvian National Symphony Orchestra, Stuttgart Academy Youth Orchestra, London Soloists Orchestra and Royal Academy of Music Symphony Orchestra under the baton of conductors including Juozas Domarkas, Saulius Sondeckis, Gintaras Rinkevicius, Modestas Pitrenas, Mirga Grazinyte-Tyla, Helmuth Rilling, Pier Carlo Orizio and others. She has given many solo and chamber music recitals. Indre has also performed in the Santander Festival (Spain), the Oxford Lieder Festival (UK) and the Pazaislis Festival (Lithuania). Some of her performances in Vilnius were broadcast on Lithuanian Radio. Since 2000 she has collaborated regularly with the Vilnius String Quartet and Kaunas String Quartet.