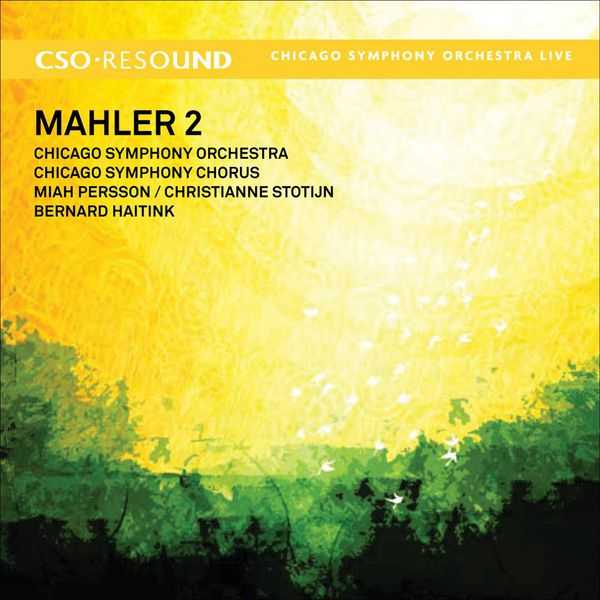 As a seasoned conductor of the symphonies of Gustav Mahler, Bernard Haitink can be expected to turn in an insightful and moving performance of the Symphony No. 2 in C minor, “Resurrection.” For that matter, the Chicago Symphony Orchestra has played this work numerous times under various conductors, and it is as experienced in this repertoire as any orchestra in the world; one should be able to predict that its playing would be splendid. Furthermore, CSO Resound can be trusted to produce a sterling hybrid SACD twofer that brings the music across with full-frequency reproduction and with astonishing depth and marvelous tone colors. It should come as no surprise, then, that this 2009 audiophile recording is one of the finest available of this popular work, albeit with some minor problems of pacing and interpretation. For better or worse, the “Resurrection” has become a concert warhorse, which means it is widely played and well-known to audiences everywhere, but it has also become overly familiar, a bit comfortable, and too easy to take, far from the emotionally shattering experience Mahler intended. It is true that there have been recordings with fiercer openings, and that the first movement takes a while to build momentum here; but it would be a mistake to expect all the expressive force to come in the work’s early stages, especially after the first movement’s collapse and the peaceful interlude of the second. The energy is certainly elevated in the scherzo, where the symphony resumes its surge to the Finale. Yet Haitink’s sense of pacing holds the scherzo in check, and it really doesn’t become explosive until it reappears, after the calming Urlicht. When the Finale comes, all the pent-up force is released at last, and Haitink’s feeling for monumental, apocalyptic scene-painting is wonderful. So this performance is eloquent and ultimately moving in the Klopstock Ode, and anyone looking for world-class playing will be quite happy with it. But anyone looking for a devastating, soul-searing rendition will feel that this one is a little too conservative and careful in its build-up to really do the job.