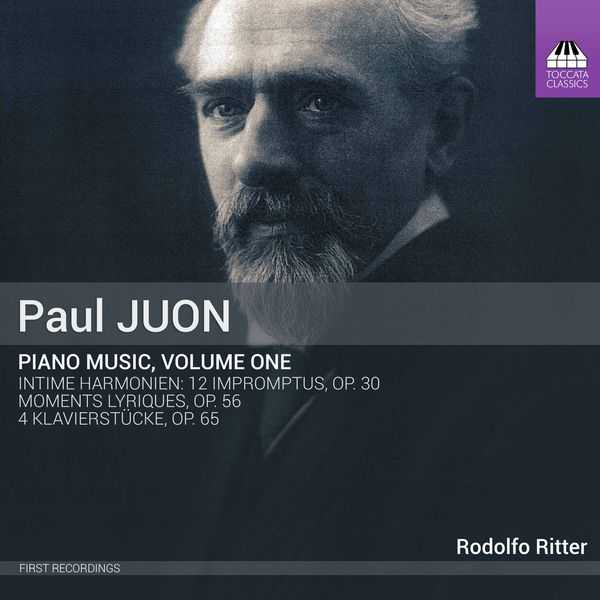 The Russian-born German-Swiss composer Paul Juon (1872–1940) produced a generous amount of piano music – no fewer than 35 opus numbers – that has yet to be explored in any detail. This first instalment of the first-ever survey of his piano music reveals a composer close to his Russian roots but also alive to the music of his own time. His style has much in common with Medtner and Rachmaninov, both friends from student days, but with a harmonic freedom that suggests Debussy. His inventive use of rhythm calls on folk influences from Azerbaijan, Armenia and elsewhere. This release is the first of a series of collaborations between Toccata Classics and Mexican musicians.

No, no, Paul Juon isn’t a Hispanic composer, despite what his name may suggest. In fact, he was born Павел Фёдорович Юон, meaning Pavel Fiodorovitch Juon or, closer to the transliteration, Youon, even though he was born in a Swiss family living in Russia for professional reasons. Nicknamed “the Russian Brahms”, he was a classmate of Rachmaninoff in Moscow before moving to Berlin, where Joachim appointed him composition professor at the Musikhochschule. In 1934, despite the honours received throughout his career, he had to leave Germany and return to Switzerland, the land of his ancestors, where he died in 1940, forgotten by the Russians who saw in him a German defector and a character of the former regime, and also forgotten by the Germans who most likely saw in him… a Russian. Sad and cruel fate for such a dignified composer and author of a substantial chamber music repertoire, several symphonic works, Lieder, an Aleko opera (much like you know who, his classmate!), and a corpus of piano pieces, from which is here the recording of the first volume. Besides his Brahms heritage, Juon’s musical language also benefits from the influence of Chopin and Schumann, as well as from the French music of his time – his Moments lyriques (Lyrical Moments) date back to the years 1915, meaning Debussy and Ravel are probably not too far. Mexican pianist Rodolfo Ritter, who has a fondness for deviating from beaten tracks and even more beaten programmes, officiates with the unmistakable pleasure of treating us to such rarities.