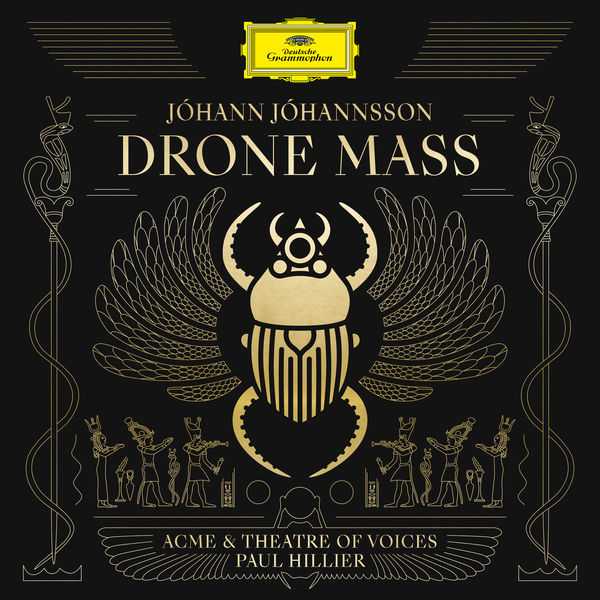 The arrival of this recording of Drone Mass—some seven years after its premiere performance and four years after Jóhann Jóhannsson’s death—somewhat blurs the definition of what a “posthumous” release looks like for a contemporary classical composer. Jóhannsson’s work is seldom decoupled from his playing of it, featuring him as the primary performer, but does not perform on this recording though he did at its premiere and several other performances. Additionally, the composition itself was commissioned by the American Contemporary Music Ensemble (ACME), who are performing it here (and who also performed it with Jóhannsson), making this release—originally recorded in 2019—a discographically unique one. It is also, more importantly, a musically intriguing one. As with much of Jóhannsson’s work—whether for classical ensembles, film scores, or electronic experimentation—the pieces are both tense and elegiac, toying with form and structure to evoke both a well-defined soundscape and a dynamic emotional response. Rather than digging into a postmodern take on chamber music or ambient electronics, here, Jóhannsson is putting to work the vocal skills of a large ensemble (the eight-piece Theatre of Voices) to deliver his hymn-like interpretations of the Coptic Gospel of the Egyptians, writings which were discovered in the Nag Hammadi library in the mid-20th century. Unintelligible to modern ears but deeply evocative nonetheless, the vocal polyphony on display is immersive and haunting. Early on in the recording, the “Triptych in Mass” sets the tone with its absolutely dizzying combination of voices, dissonance, and drone, leaving the listener both breathless and anxious. Other segments—”The Last Foul Wind I Ever Knew” and the two-part “Divine Objects”—are similarly intense. By the time “The Low Drone of Circulating Blood, Diminishes With Time” initiates the closing four-part sequence of the piece, Jóhannsson has shown that he is clearly disinterested in easy beauty or background ambience and is, instead, pursuing a thoughtful, dynamic, and intent music that rewards a listener’s focus and engagement. It’s a forceful and unforgiving piece that posits an exciting shift in direction from the composer that, sadly, appears to have not gotten any further exploration. Nonetheless, as a document of one of his final works, Drone Mass is an exciting and exhilarating statement.