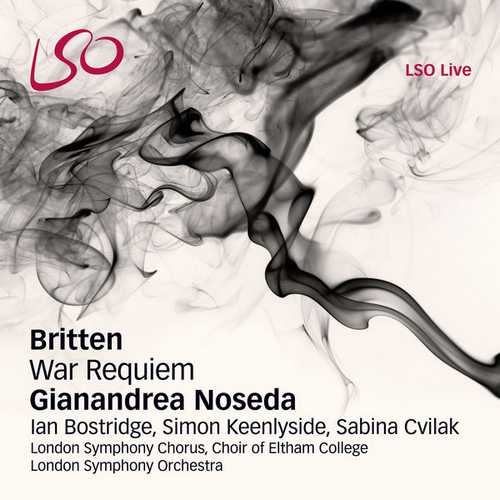 For his first LSO Live recording, Gianandrea Noseda is joined by three of today’s most widely acclaimed singers for a magnificent performance of Benjamin Britten’s choral masterpiece.

Premiered 50 years ago on 30 May 1962, the ‘War Requiem’ was commissioned for the re-dedication of Coventry Cathedral, which was destroyed by bombing raids during the Second World War.

Using the Latin mass of the dead, interspersed with texts by war poet Wilfred Owen, Britten, a pacifist and conscientious objector, created a work that both mourned the dead and pleaded the futility of war. The ‘War Requiem’ was to become one of the defining choral works of the 20th Century.

Gianandrea Noseda was the first foreign Principal Guest Conductor of the Mariinsky Theatre in St Petersburg and over the past decade his reputation in the opera house and concert hall has blossomed. He regularly conducts the LSO, as well as many of the world’s other great orchestras, and is Music Director of the Teatro Regio in Turin.

Ian Bostridge, Simon Keenlyside and Sabina Cvilak perform regularly in the world’s leading opera houses and are renowned for their performances in Britten’s music. The LSO and LSC have both enjoyed long relationships with the composer and appeared on the first recording of the ‘War Requiem’, conducted by Britten himself.