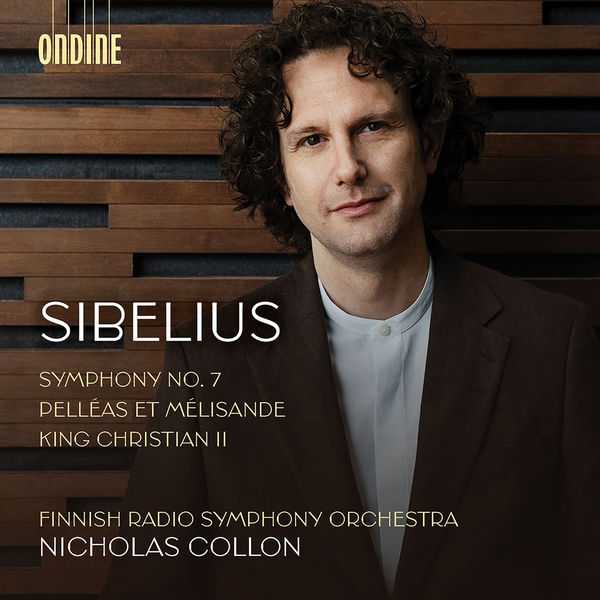 Nicholas Collon began as the new chief conductor of the Finnish Radio Symphony Orchestra in September 2021. This all-Sibelius programme, carefully selected by the conductor, is his debut album together with his new orchestra. Collon offers fresh and modern interpretation of Sibelius’ symphonic testament, the 7th Symphony, and brings to life the colour and drama of Sibelius’ incidental music for two plays – Maeterlinck’s famous Pelléas et Mélisande and the historic King Christian II.

The writing process of Sibelius’ serenely balance 7th Symphony took several years. Sibelius’s sketchbooks reveal that in the early 1920s he had four movements in mind. It was not until the later stages of writing the work, in 1923, that Sibelius amalgamated the symphony into its unique single-movement structure. Sibelius’s absolute mastery of continuity strengthens the unity of the work: it is often impossible and indeed irrelevant to attempt to define precisely where one idea ends and another begins, whether we consider details of harmony and orchestration, tempo relationships or structure. The Seventh remained his final word as a symphonic composer, and this is a function that it fulfils admirably. Its balanced, Apollonian emotional atmosphere testifies to a composer confidently in command of his faculties and at peace with his inner demons.

Alongside symphonies and tone poems, incidental music constitutes a significant category in Sibelius’s orchestral output. Some of Sibelius’s most popular miniatures began their life as music for the stage. Sibelius’s original music for the play King Christian II consisted of four numbers, but in summer 1898 he wrote three further numbers. Later still, he fashioned a five-movement orchestral suite out of these seven numbers. The King Christian II-Suite became Sibelius’s first published orchestral work, and due to its popular style, it was widely performed abroad.

When, in spring 1905, Sibelius wrote incidental music for the play Pelléas et Mélisande by Belgian playwright Maurice Maeterlinck, he joined a group of several composers inspired by the drama. Sibelius adapted his music into a nine-movement orchestral suite, containing all but one of the numbers originally written for the play. In writing incidental music, Sibelius had the knack of creating a captivating and expressive mood with very simple means. This was a particularly relevant skill for the mysterious Symbolist narrative of Pelléas and Mélisande. Sibelius underpins the mood of the drama with his most delicate paintbrush, so to speak, breathing life into its unreal dream world.