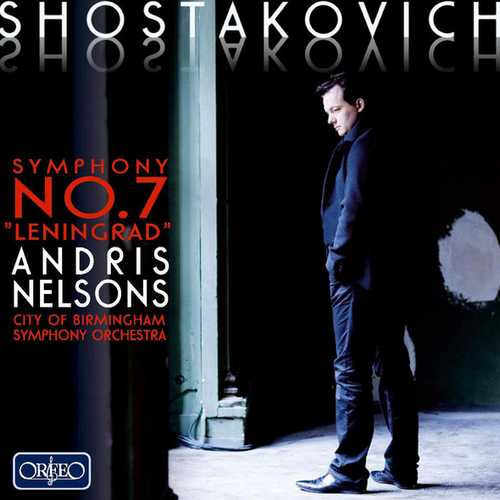 Andris Nelsons has been familiar with the Russian and, more especially, the Soviet musical tradition practically since he began his training as a conductor – after all, he studied in St Petersburg with Alexander Titov and also with Mariss Jansons. His journey to Shostakovich and the Russian composer’s Seventh Symphony, which he recently conducted to great acclaim at the BBC Proms with the City of Birmingham Symphony Orchestra, is one that makes perfect sense in this context.

Shostakovich’s symphonies continue to be at the mercy of commentators eager to find historical and political encodings in them, and yet a work like the ‘Leningrad’ Symphony has a universality for which the term ‘war symphony’ is wholly inadequate. The almost idyllic opening of the first movement and the disruption of that mood by the sudden irruption of a series of timpani rolls, together with the themes associated with a military attack, remain etched in the memory in spite of the final frenzy bound up with the idea of victory. The tradition of Shostakovich’s great Russian predecessors, especially Mussorgsky, enabled him to lend his voice to the tormented soul of a nation above and beyond all ideological divisions. It was passages like these that led to the rapid worldwide dissemination of this work once the microfilmed score had reached the United States after an adventurous journey via the Middle East.

A new chapter in this exciting performance history of the symphony has now been written by the City of Birmingham Symphony Orchestra under its music director, Andris Nelsons, with a thrilling reading notable for its musical focus and depth and, not least, for its contrasts between rhythmic power and lyrical tenderness. The monumentality of Shostakovich’s Seventh Symphony emerges to particularly moving effect in a performance in which garish primary colours are banished in favour of balance.

Dmitry Shostakovich’s Symphony No. 7 in C major, “Leningrad,” has been extremely popular since it was premiered in 1942, and its use as wartime propaganda gave it legendary status among symphonies composed during World War II. Yet despite its supposed simplicity, and widespread publicity of the symphony as a symbol of resistance, it remains an enigmatic work that takes on new meanings and interpretations over the years. While he contemplated titles for the four movements, Shostakovich never supplied it with a program, so the symphony can be taken as absolute music that functions purely by its own formal design and expressive needs. Or it can be read as one of Shostakovich’s profoundly personal testaments, where nothing is truly as it seems on the surface.

Andris Nelsons may well have interpreted it in this light, for his handling of the piece’s moods tends to emphasize veiled sonorities and dark turns of expression, aspects that would be played down in a more overtly heroic reading. Nelsons and the City of Birmingham Symphony Orchestra even play it with the elegiac tone and sardonic edge usually reserved for the Tenth or Fifteenth symphonies, giving the music a grieving and sometimes bitter tone that seemingly puts the lie to the victorious outcome of the Finale. This 2011 recording shows nothing of the manipulated wartime image of Shostakovich, but leans more toward an understanding of the composer that has emerged since his death in 1975: one of a troubled artist who suffered for his art, even when hailed as a hero in the service of the Soviet government. This performance is highly recommended for its insights, if not necessarily for the quality of the live recording.