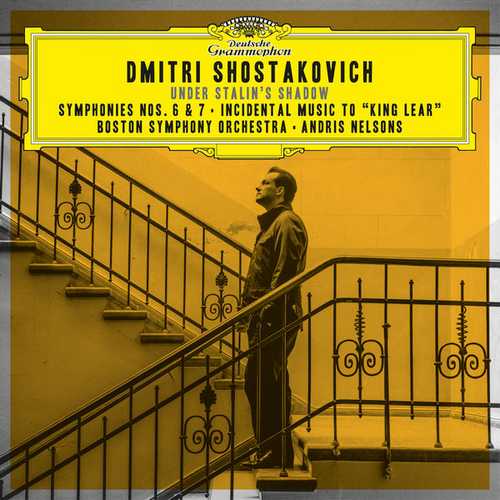 Andris Nelsons is the Music Director of the Boston Symphony Orchestra and new Gewandhauskapellmeister of the Gewandhausorchester Leipzig. With both appointments, and in leading a pioneering alliance between these two esteemed institutions, he is firmly underlined as one of the most renowned, exciting and innovative conductors on the international scene today After the “scandalously successful” (Sunday Times) Symphony No. 10 in 2015, “the sheer expressive beauty” (Gramophone Magazine) of Symphonies Nos. 5, 8, 9 from 2016 and the “overbearing vividness” (The Guardian) of the most recent Symphonies Nos. 4 & 11 Nelsons and the BSO continue the acclaimed cycle with the Symphonies Nos. 6 & 7, complemented by two other works by Shostakovich, the Suite from the Incidental Music to “King Lear” op. 58a and the Festive Overture op. 96.

The goal is a complete Shostakovich cycle on Deutsche Grammophon with the Boston Symphony Orchestra.

You don’t have to speculate as to whether Latvian conductor Andris Nelsons’ interpretations of Shostakovich have been shaped by his having grown up in the Soviet Union; he has said himself that they are. And you can get a start on understanding how with this excellent release, part of a complete Shostakovich cycle by Nelsons and the Boston Symphony Orchestra. If you’re not going for the whole cycle immediately, you might well pick this album to start. It contains one offbeat symphony and one of the big epoch-makers, together with some lesser-known orchestral works, and each piece comes alive.

The title “Under Stalin’s Shadow” applies to Nelsons’ entire series, and it’s more applicable to some works than to others. It might work for the Symphony No. 6 in B minor, Op. 54, a light, quirky, rather sardonic work from 1939. It was written after Shostakovich had been condemned by Joseph Stalin in 1936 and had rehabilitated himself with the Symphony No. 5 in D minor, Op. 47. The Symphony No. 6, the composer said, was intended to convey moods of “spring, joy, youth,” but it is anything but neoclassic with its odd shape and its mood of jibe, beautifully brought out by Nelsons and the BSO. In the Symphony No. 7 in C major, Op. 60 (“Leningrad”), Shostakovich was not under Stalin’s shadow but, for once, on his side: the symphony is the 20th century’s great response to war, with its ominous first-movement march of advancing Germans.

Sample this to hear how the great sweep of Shostakovich’s more epic works ought to be done. The slow movement of this work is profound, and existential in this performance. There are plenty of chances for the BSO to show off their high level of playing under Nelsons in the Festive Overture, Op. 96, a fine barn burner of a work. If you hadn’t seen the title or heard the work before, you’d be hard pressed to identify the subject matter of the often jaunty King Lear suite, Op. 58a, but it somehow adds balance to the program. The recordings, from Boston’s Symphony Hall, are designated as live, but no live audience is present; the use of the hall’s distinctive acoustic is beautifully in sync with the program. A major Shostakovich release.