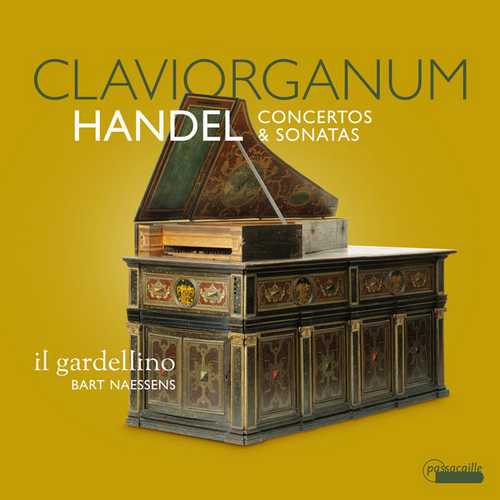 The claviorganum is not an instrument we hear much from these days, but versions of this cross between a harpsichord and an organ – which could be played individually or together, on one or two manuals – were by no means a rare sight in Europe between the 15th and 18th centuries, with Henry VIII owning several. What’s more, it was no Frankenstein creation for mere curiosity’s sake, but instead an eminently practical piece of problem-solving, because while the harpsichord is perfectly suited to fast, brilliant passagework, but can neither sustain long notes nor change tone or dynamic, the slightly-less-horizontally-nimble organ counts those latter deficiencies as its key strengths. As for why we haven’t seen a resurgence of claviorganum sightings as period performance has gone mainstream, perhaps it’s a combination of very few examples having survived in their original state, and the fact that composers of that period rarely specified on their manuscripts as to which keyboard instrument should be used.

Which leads us nicely to this Handel programme from organist, harpsichordist and conductor Bart Naessens with period ensemble Il Gardellino, because when there’s no surviving evidence that Handel was familiar with the claviorganum himself, their programme is necessarily a hypothetical one, simply presenting repertoire for which the instrument feels a good fit. It’s a richly and various selection too, showing the instrument in both soloist and continuo role, and showing off Il Gardellino themselves in their own chamber and orchestra modes: three organ concerti (HWV 292, HWV 293, HWV 306), the Oboe Concerto in G minor, HWV 287 (arranged for Flute in A minor), the Harpsichord Suite in F major, HWV 427, the Concerto grosso in D major, HWV 317 and the Trio Sonata in B minor, HWV 386b.

The resultant performances are a great listen, with highlights coming thick and fast. Inevitably the flute concerto is one such highlight, when it’s a Thoroughly Good Thing anyway to flit mid-concerto between harpsichord and organ continuo, and even more so in flute concertos where the dulcet timbre of organ pipes is so complimentary. But its success is equally down to flautist Jan De Winne’s beautifully shaped and shaded solo lines, and the vibrant and well-balanced capturing of the violins as they dialogue with him. Also indeed for the buoyant elegance from Il Gardellino, both here and everywhere else.

Another especial treat is the Harpsichord Suite, HWV 427which inevitably sounds transformed under De Winne’s well-judged distribution of the score between harpsichord and organ. The Opus 7 “London” Organ Concerto in B-flat major, HWV 306 is also sounding radiant. About the recording location: the impression is of a substantial church space which comes over as warmly supportive in the chamber works, and more strikingly resonant in the orchestral numbers; and while with the latter there’s occasionally the slight impression of ensemble sound swimming in the space, it’s always attractive and gives a colourful sense of place.

A really nice blend of curiosity factor and top-drawer playing.