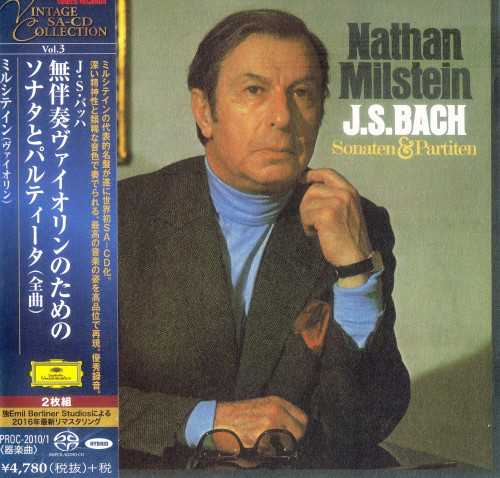 Natan Mirshitain was born in Odessa during the Imperial Russian era on December 31, 1903, and died in London on December 21, 1992, is one of the best violinists of the 20th century. In 1916, she studied at the Petersburg Conservatory with the violin master, Auer, who grew up Erman and Heifetz, and made her debut in 1923. In 1925, he and his pianist Horowitz went on a performance trip to Europe, where he continued on the west. In 1942, during World War II, he gained American citizenship and was active in concerts and record recordings based in New York. He was praised as “Nobleman of the violin” for his sophisticated and elegant performance.
The highly harmonious expression of the skill of Milctein’s craftsmanship and the background of beautiful sound is a stereophonic recording of the Bach’s unaccompanied violin sonata and partita on a German Gramophone in 1973 at the age of 69. Shows the best sublime. First, the tone beauty. Each song has the appeal of attracting the listener only by listening to the opening note, and the tone and tactile sensation of that note alone gives a forewarning of the subsequent music mood and world view. Next, the modeling feeling. For example, setting the tempo for Partita No. 2. The tempo falls off with each song, becoming very heavy in the Saraband, regaining power at the next fast tempo of the Jig, and moving to the last magnificent Chaconne is very convincing. Third, the skill of the master itself. At Chaconne, the chords that are attacked multiple times are perfectly pronounced and emit their own shades, and you can feel that the sections including the lingering sound are controlled according to the image of Milcytein. In addition, the expression of the polyphony in the fugue movement of each song is also really clear, and the beauty of the musical structure is three-dimensionally and visibly reproduced. In addition, traditional playing techniques (deceleration at the end of phrases, occasional portamento and vibrato playing) are used taking into account Bach’s style and the natural flow of music, and do not abuse dynamics and slow changes. All show a sense of balance that is the norm for Bach performances in modern instruments and modern playing techniques.
Milcytein recorded this song in monaural from 1954 to 1966, and has a different sense of urgency and the perfect finish with a repetition cut, but the expression of a style that is more suitable for Bach It can be said that this stereo recording greatly outperforms the interpretation and the large-scale tolerance.
In the production of this series, after maintaining and restoring the original analog master tape of the home country from the beginning, high-quality digitization (192 kHz / 24 bit) was performed, and a dedicated engineer of the home country label was used for this series. Mastering work was performed over time in a detailed process. This is a reproduction of the sound quality on the legitimate line of DG. The important thing about the release is that the reprinting process itself, including the digitization and mastering steps, has evolved over the last few years. Equipment related to digital technology is constantly improving, and it has become possible to produce higher quality and more delicate sound sources. Now you can enjoy the original analog master with higher sound quality. In this SACD project, it became possible to release with a wonderful sound.