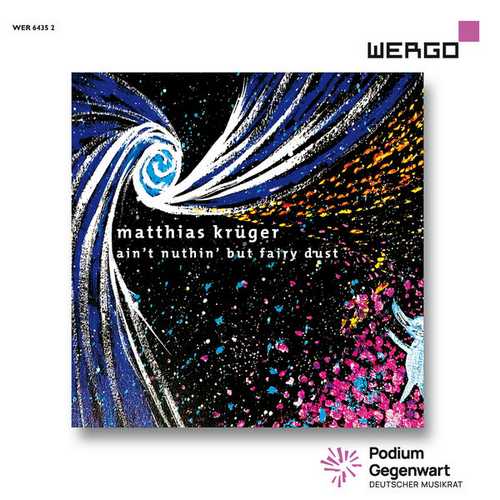 On his portrait recording Matthias Krüger searches for truth and identity. In his works, musical and non-musical elements and quotations fuse into a steady stream. This results in a seemingly never ending musical network of associations. The composer refers likewise to classical music, old philosophy and pop culture. According to booklet author Bastian Zimmermann: „In Krüger’s music, nothing is safe from becoming the beginning or the end of a musical idea”.

The ensemble piece le vide à perdre incorporates impressions from a night at a club in Istanbul – a liberation of oneself in ecstasy, played with great commitment by the Ensemble Ascolta conducted by Nicholas Kok.

The orchestra piece Bellygoat Boom (substrate), commissioned by West German Radio (WDR) and conducted by Elena Schwarz, was influenced by cultural and artistic practices of the Maori that Krüger experienced in New Zealand.

The audio version of sweep over me them dusty bristles played by the Ensemble Inverspace is available online exclusively. Additionally, the specific video choreographed by Eddie Martinez and produced by Rikisaburo Sato is at disposal on the vimeo channel of Edition Zeitgenössische Musik. It toys with retro aesthetics that mirror the electro swing appeal of the music. Distinctively, Krüger weaves fundamental questions of humankind and human striving into it.