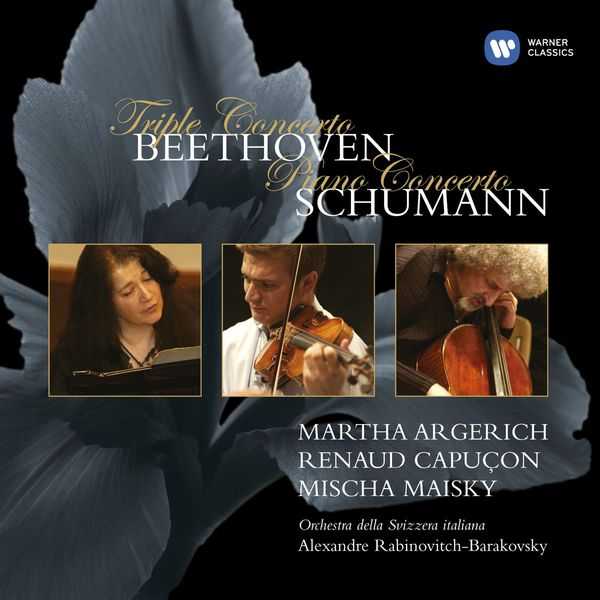 While recordings of Beethoven’s Concerto for piano, violin and cello and orchestra in C major, Op. 56, have never been thick on the ground and listeners must therefore be grateful for every single one, isn’t this July 2002 recording by Martha Argerich, Renaud Capuçon, and Mischa Maisky with Alexandre Rabinovitch-Barakovsky conducting the Orchestra della Svizzera italiana just a wee bit much? Even discounting the irrepressible exuberance of pianist Argerich and the unending enthusiasm of cellist Maisky, isn’t their performance here a little bit too much like a couple of showoffs grandstanding? And don’t they just walk all over violinist Capuçon, making him an accompanist in his own concerto? And don’t they just run all over conductor Rabinovitch-Barakovsky, making the accompanist a timekeeper in a symphonic concerto? Stick with the Richter/Oistrakh/Rostropovich/Karajan, a true partnership of interpretative equals.
And while recordings of Schumann’s Piano Concerto in A minor, Op. 54, have never been in short supply and numerous pirate performances of Argerich’s way with the work have circulated for decades, this is only her second legitimate recording of the work. It is also far the better of the two recordings, but then, the other recording was made with conductor Nikolaus Harnoncourt, the man who elevated perverse eccentricity to the level of an interpretative style. Whatever one may care to say about Rabinovitch-Barakovsky — and he is at best a non-entity — he is still willing to try to follow the score. And while this is not the greatest recording of Argerich performing the Schumann concerto in existence, it is still a whole lot better than her weird and willful recording with Harnoncourt. EMI’s live sound is a wee bit recessed and a little bit distant.