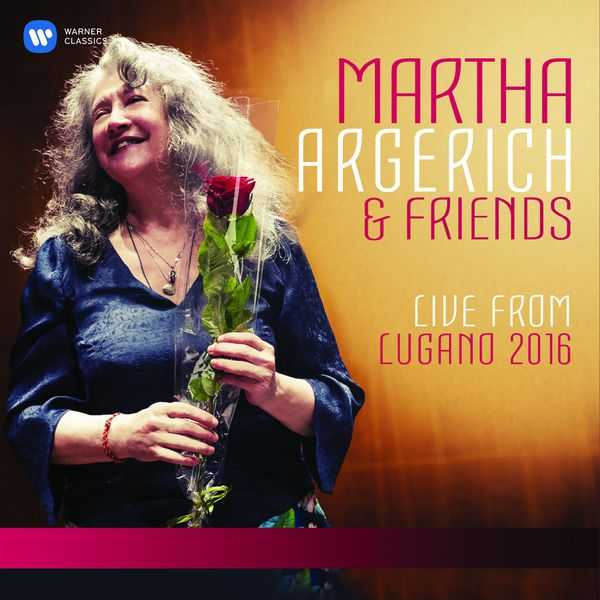 The annual Progetto Martha Argerich at the Lugano Festival, is well-established as one of the world’s most important music festivals.

The latest instalment of highlights from the Martha Argerich Project at the Lugano Festival, this is the 14th annual 3-CD set celebrating the musical fruits of a project in which young artists join seasoned performers, including Martha Argerich herself, to explore wide-ranging chamber music and orchestral repertoire, both well-known and rarely heard.

The 15th annual festival, which ran from 7-30 June 2016, featured international soloists such as Nicholas Angelich, Stephen Kovacevich, and Renaud Capuçon as well as many of her young protégés, including Karin Lechner and Sergio Tiempo, and her daughter Lyda Chen. The festival also celebrated the occasion of Martha’s 75th birthday, and she features on many of the performances on this highlights collection, including Ravel’s Gaspard de la Nuit and Ravel’s Piano Concerto in G major.

The previous batch from the 2015 Lugano Festival was especially rich, with many of the chosen moments being particularly thrilling (Brahms’ Trio, Poulenc’s Sonata for two pianos). The 2016 Festival would in turn see one great event: the tremendous Martha agreed to play on stage, for the first time in more than thirty years, Ravel’s Gaspard de la nuit. She was worried at the thought of measuring herself against her own success from forty years ago—she recorded in 1974 for Deutsche Grammophon a Ravel LP featuring Gaspard, Sonatine and Valses nobles et sentimentales, which is still in everyone’s memory despite its disappointing sound recording. On the spot, it’s obviously all the magic from a sound completely revealing itself, and the permanence of a vision. The truly haunted tone of Le Gibet leaves a lasting impression, Scarbo’s goblin literally shatters when Ondine, completely radiant, screams her recollections of Liszt and remembers just as much Une barque sur l’océan written a few years before. The rest of the testimonies from this 2016 Lugano Festival is as varied as usual. We’ll start with the rarity among the musical repertoire that is Busoni’s Violin Concerto, in D major (like the ones from Beethoven, Brahms, Tchaikovsky), also being the opus 35 (like the ones from Tchaikovsky, Korngold), under Renaud Capuçon’s determined bow. As for the two pianos, a classic from Argerich’s repertoire, Mozart Sonata for Two Pianos K. 488 that she’s enjoyed playing regularly with her friends for a few years, here with Sergey Babayan. And let’s not forget the very sincere Horn Trio from Brahms, with the trio Capuçon, Angelich & Guerrier (in 2015, a version without horn was unforgettable), or especially Bach’s Sonata by Martha Argerich and Tedi Papavrami, which could make us forget to not have this duo play the five other works written by Bach for the same formation. We cannot ignore the too short moment from the duo Tiempo & Lechner, as thrilling as ever, here in two Falla’s dances. During this 2016 edition, Argerich also played Ravel’s Concerto in G major. Maybe not in its most extraordinary version, but listening to its phrasings, accents, and nuances that are so personal in the Adagio assai this work remains the source of a rare emotion. May this Lugano Festival resuscitate in a few years with the participation of generous sponsors nostalgic of these incredible moments.