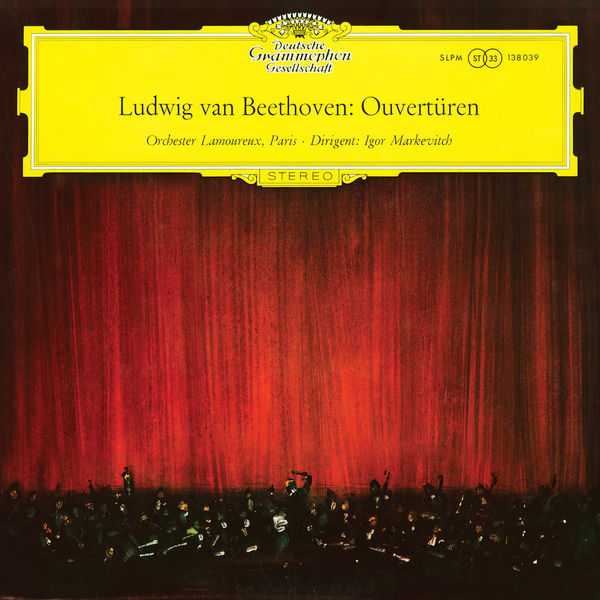 IDIS’ Igor Markevitch Conducts Beethoven Overtures consists of early stereo recordings made in 1958 with the Orchestre des Concerts Lamoureux and originally issued on DGG LPs. This is certainly the kind of reissue DGG could’ve done perfectly well on its own, and in fact DGG did include five of these overtures on its boxed set Igor Markevitch: Un Veritable Artiste. The lone holdout is Egmont, which IDIS is claiming as a “World Premiere Recording on CD.” Of course, this recorded cycle of Beethoven overtures is a highly desirable one to have; with the sole exceptions of Coriolan — where Markevitch is a wee bit off his game, and perhaps in this instance cedes to the more precise and grimly determined 1957 account of Otto Klemperer — and Namensfeier, which is a little narrower in sound and may have been recorded on a different occasion from the others. Otherwise the performances are blisteringly intense, but in the IDIS release the stereo spread is more weakly defined than it is on Un Veritable Artiste; it’s sort of like having an exact copy of the DGG original. As Egmont is the unique track, the IDIS engineers juice it up a little, and wind up with distortion; throughout the IDIS release there are little gaps in the sound where a tick from an LP has been taken out. Igor Markevitch: Un Veritable Artiste is not a terribly expensive box, but it isn’t cheap either, and of course that will not get you Egmont. However, it makes sense that if the listener wants to experience the power of these great Markevitch recordings in full cry and proper integrity, it is perhaps wiser to save one’s pennies and spring for the DGG box than to put them toward this IDIS release, which basically anyone with good audio recording software and a clean copy of the DGG LPs could have made.