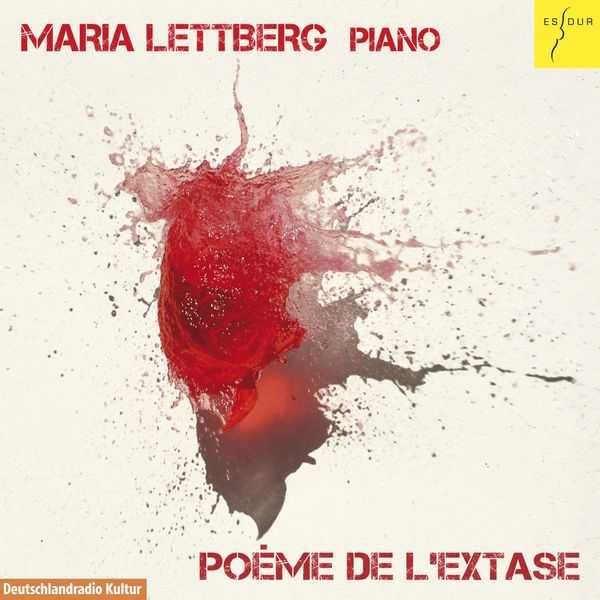 Latvian-born pianist Maria Lettberg confesses to being addicted to the music of Alexander Scriabin. To mark the 100th anniversary of his death, she releases a very personal homage in which his orchestral ‘Poème de l’extase’ (in a highly-demanding transcription for solo piano) takes centre stage, alongside pieces by Liszt and Messiaen, and a pair – by Harald Banter and by Manfred Kelkel – both based on the Russian’s music.

Olivier Messiaen was not a Scriabinite, but the aesthetic connections are clearly recognisable: synaesthesia, a penchant for orientalism and pantheism, and the creation of a new world vision – the world of ecstasy. Lettberg’s choice of the first and last pieces from Messiaen’s great piano cycle of 1944, ‘Vingt regards sur l’enfant-Jésus’, leads the listener into a world of religious intoxication. And in Franz Liszt’s ‘La lugubre gondola’, written in mourning for Richard Wagner, one can also hear ecstasy – Liszt’s later works exhibit many parallels to Scriabin. Musicologist and Scriabin researcher Manfred Kelkel’s ‘Tombeau de Scriabine’ was commissioned in 1972 by Radio France for the 100th anniversary of Scriabin’s birth. ‘Naître et disparaître’ by jazz musician Harald Banter, composed in 2008 a hundred years after ‘Poème de l’extase’ and dedicated to Lettberg, grapples with Scriabin’s idea of the act of creation in the cosmos.