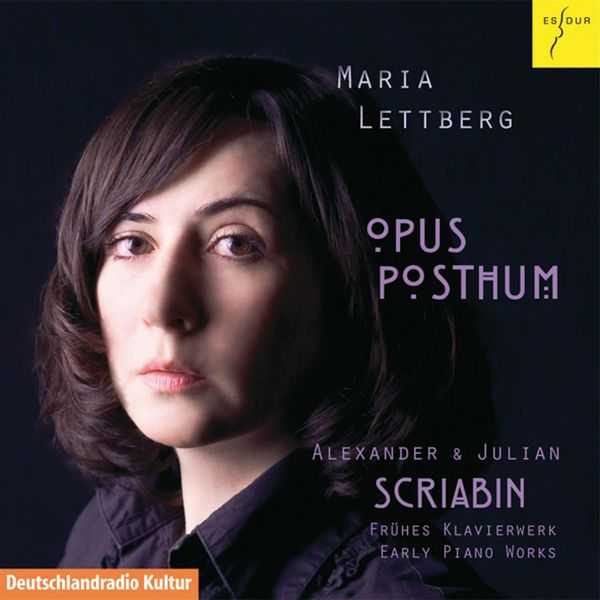 “Several years ago I presented a recording of all piano works with opus numbers by Alexander Scriabin. I rehearsed, played in concerts and then recorded eight CDs, 207 works, and eight hours of music”, notes pianist Maria Lettberg. “Scriabin’s music becomes accessible via a roundabout route but then it gets under your skin and intoxicates you like a drug, makes you euphoric, addicted and…happy.” With the present recording of the early works without opus numbers, she happily completes her mammoth survey of Scriabin.

Scriabin started to compose at a very young age. In the years 1885 to 1889 he made a catalogue of his works in a sketch book, in which around fifty pieces are listed. Some of these pieces were later revised and released by Scriabin, some only published after his death and many are missing. Maria Lettberg has recorded the extant pieces at ES-Dur in cooperation with Deutschlandradio Kultur. In addition to fugues, waltzes and early first versions of sonatas, there are three first recordings of works that were only edited in 1997: Two Scherzos and the Piano Piece in B minor. The disc ends with four preludes which are sombre and mystical. It is uncertain whether these pieces come from Alexander Scriabin or his son Julian, who also composed early in his life but tragically drowned in the Dnieper aged only eleven.