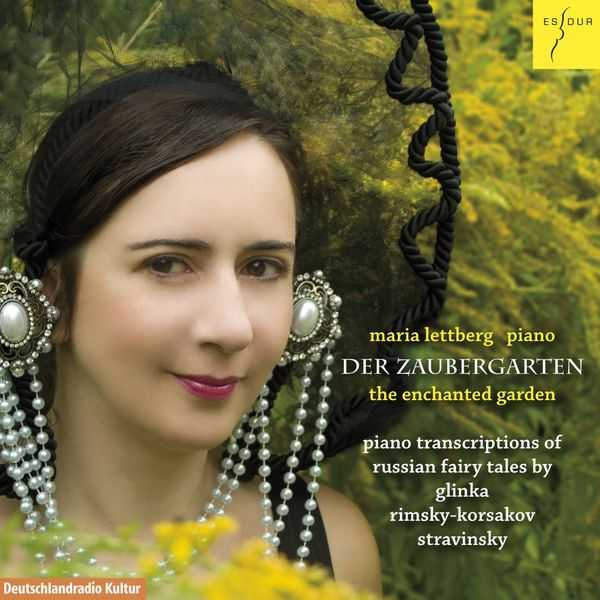 Rimsky-Korsakov: Snegurochka (The Snow Maiden)
05. Dance of the Tumblers (Arr. I. Mikhnovsky for piano)

Following her Scriabin recording for ES-Dur, pianist Maria Lettberg carries listeners off into the magic garden of Russian fairy tales and myths. This enchanting disc presents paraphrases on some well-known Russian operas by Mikhail Glinka and Nikolai Rimsky-Korsakov as well as Igor Stravinsky’s solo piano version of his ballet, The Firebird. The expert piano transcriptions of the Glinka and Rimsky-Korsakov works are made by some equally famous composers – and admirers – such as Liszt, Lyapunov and Rachmaninov.

The sagas, fairy tales and songs tell of transformations, curses and promises from ancient times, which were systematically collected and published in the 19th century. The Russian opera librettists and ballet set designers of this time dug deeply into this treasure trove.

Besides the son of the Tsar Sultan in the form of a bumble-bee, the colourful repertoire on Lettburg’s CD conjures up stamping dwarves, whispering fairies, rumbling snowstorms and gently falling snowflakes; past tears that don’t cry and eggs that cannot be broken; to the wonders of a white many-turreted city, the firebird who presents us with a golden feather, and the fantastical dwarf villain Chernomor (from Glinka’s Ruslan and Lyudmila), whose magic garden was the epitome of Russian orientalism.

One of the most exciting pianists in Europe, Maria Lettberg is a Swedish citizen, but she was born in Riga and currently lives in Berlin. Noted for her unusual concert programmes, her numerous CDs have also attracted international interest. They include piano pieces by Erkki Melartin and Alfred Schnittke and the entire solo piano works of Alexander Scriabin, which she completed with the acclaimed ES-Dur recording, Opus Posthum (2012) of his earliest works.