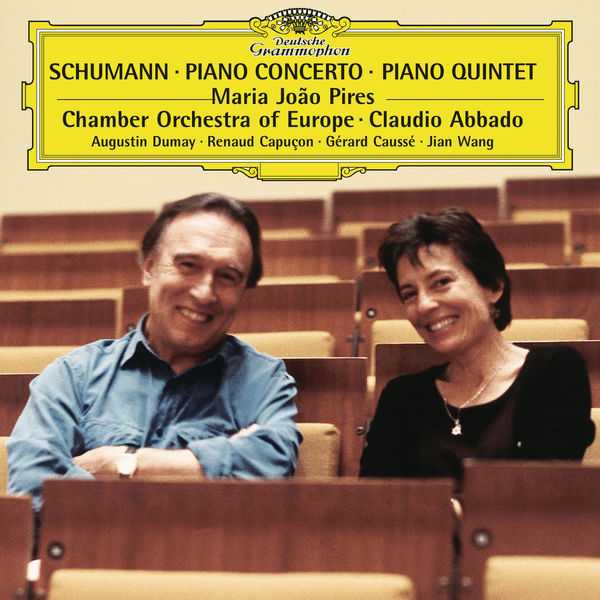 Deutsche Grammophon has another excellent Schumann Concerto in its catalog, the Pollini/Abbado, with the Berlin Philharmonic, coupled with a good but not great Schoenberg Piano Concerto. Not surprisingly, Pollini is more muscular and evenly balanced in the Schumann, even if he is, as usual, a bit straitlaced. Pires is always the sensitive and probing artist, or so it seems. Here, she is alert from the opening descending chords to the expressive potential in every bar. She puts much more thinking and feeling in her interpretation than Pollini and most others I’ve heard.

While some may find her frequent use of rubato somewhat overdone, most will likely judge it a positive trait in her generally epic/Romantic view of this score. As mentioned, Pollini is more muscular, but Pires aims for and attains a bigger vision of the Schumann. Thus, her finale has a Brahmsian sort of feel; so, for that matter, does her first movement, though its more ponderous moments have a sensual aura about them that contrasts well with the more potent sections. Her conception of the whole work is well-reasoned and -shaped, and Abbado and the COE support her splendidly.

The one drawback is in the engineering: it sounds as though someone put a microphone inside the kettle drum, so prominent are its thunderous roars in several places. Try the big orchestral climax in the first movement that leads to the cadenza (which Pires plays brilliantly, by the way), and you’ll hear what I mean. Still, this is overall a Schumann Concerto to rank with the better ones of the past and present, including those by Fleisher and Cliburn.

The Quintet is also a success here. Pires plays sensitively throughout, as do her chamber colleagues. Especially impressive is cellist Jian Wang. As a group, these players impart a passion and fervor to their Romantic approach, never taking a misstep or making an unmusical sound. A simultaneous release on Ivory Classics of this work, featuring Earl Wild and members of the American String Orchestra, presents a more Classical view of the work. Each interpretive stance is valid and it would be hard to choose between the two, though further listenings might produce a decisive verdict. Personally, if I had to choose between Wild and Pires as pianists in general, I’d go with Pires. Suffice it to say that this Pires-led performance is convincing in all respects.

Except as noted above, the sound on both works is excellent and the album notes informative. In sum, this is a most impressive issue.