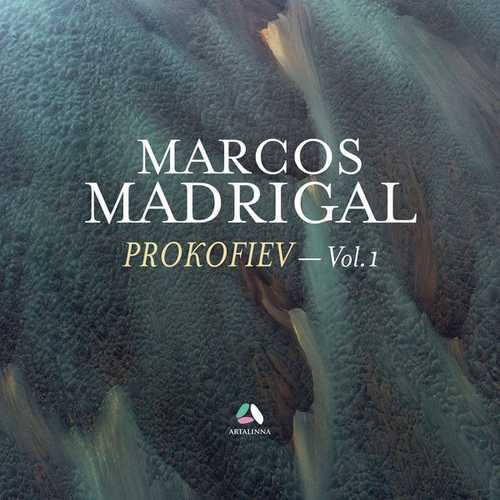 A multi-faceted array of Prokofiev is Cuban pianist Marcos Madrigal’s offering for this second solo recording of his for Artalinna/Academy Productions. First, the Visions fugitives Prokofiev composed between 1915 and 1917 when still in his mid-twenties – fleeting, blink-and-you’ve-missed-it character pieces, many of whose multifarious moods (not least irony and ambiguity) and styles would reappear in his music over the ensuing decades. Then the Piano Sonata No. 5 in C major, Op. 38/135, heard here in its original 1923 version rather than its more often-performed 1953 revision. Then finally the famous Piano Sonata No. 7 in B-flat major, Op. 83, completed in the early 1940s.

Marcos Madrigal has a poetry and delicacy to his voicing, and a flexibility to his tempi, that makes for a very attractive set of Visions fugitives. Actually it’s Debussy who springs very clearly to mind with his opening Lentamente, and he brings a lovely bell-like, silvery sonority to No. 2 (Andante)’s upper register chimes, helped by the brightly immediate capturing. If there’s one element which comes out slightly less strongly, then it would be Prokofiev’s more acerbic side.

Then, as the Visions fugitives could be seen as the trailer for the Prokofiev to come, so it is with Madrigal’s interpretations. Sonata No. 5 opens highly attractively, with gentle radiance and satisfying clarity of touch, and the work as a whole sees him bring out the music’s gentle lyricism and whimsy without ever veering off course into the land of self-indulgence. As for Piano Sonata No. 7, while its first movement comes in at a comparatively expansive 9’13, this isn’t so much because Madrigal hasn’t given us forwards drive where the score suggests it, but more because he’s made the most of the more mystical moments where time really can be made to stand still, constructing a narrative that hooks the listener in, and offsetting a Precipitato final movement that perhaps lacks the sharp, inner tension you hear from Pollini.