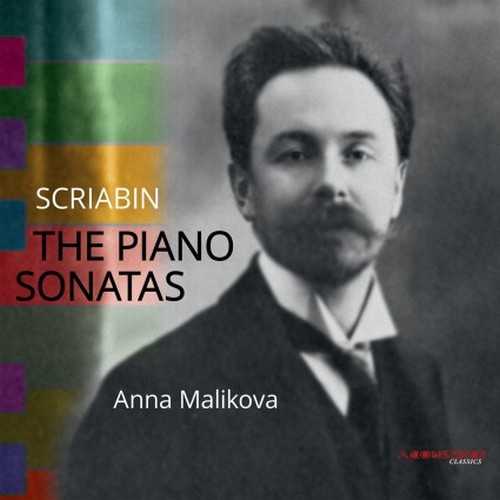 In 2015, we celebrate the hundredth anniversary of Alexander Scriabin’s death. To commemorate this occasion, Russian pianist Anna Malikova and the ACOUSENCE label is issuing a new complete recording of the composer’s ten piano sonatas, which will surely be regarded as definitive.

Scriabin completed his piano studies at what is today the Tchaikovsky Conservatory and, starting in Moscow, went on to have an international career. He himself was the first champion of his music, followed by Vladimir Sofronitsky, Heinrich Neuhaus and his pupil Lev Naumov. Naumov in turn was Anna Malikova’s mentor for a period of 15 years, so with this background, she brings a high level of authenticity to these works.

Anna Malikova masters these sonatas, which test the very limits of piano technique, with impressive technical prowess and exceptional virtuosity. Not only does she display her deep understanding for the composer’s mystical world, but also presents the incredible development of Scriabin’s unique compositional style in a fascinating way. In his early years, he was still interested in the romantic, virtuosic tradition of Chopin and Liszt, only to break almost every compositional rule over the course of his career and blaze new paths.

In the first sonatas, Anna Malikova especially highlights their virtuosic aspects. The listener is captivated right at the outset by the very first sonata. The first ascending runs furiously introduce the listener to Scriabin’s sonata world. The contrast to the abyss-like death march of the last movement could not be greater. Malikova shows us here that she understands how to develop nervous tension and maintain it until the very end, even while greatly differentiating the dynamics. In the second sonata, Malikova already points to the beginning of the development of Scriabin’s unique individual style, which departs from those preceding it in every aspect – in its form, technique and above all its concept of sound – more and more with each sonata. In the finale of the fourth sonata, Scriabin’s virtuosic, post-romantic side emerges once more, but starting with the fifth sonata, the break with the past is complete. Malikova invites the listener to new harmonic dimensions of Scriabin’s sound world. There are great contrasts between the dark sixth sonata and the seventh sonata with its exciting sonorities. Here, Malikova proves herself to be a performer who is exceptionally sensitive to Scriabin’s “Mysterium”. She easily overcomes the enormous technical challenges and forms every sonata into its own cosmos. At the same time, she traces a path from the meditative eighth sonata to the glowingly vibrant trills of the tenth, which conclude Scriabin’s sound cosmos.