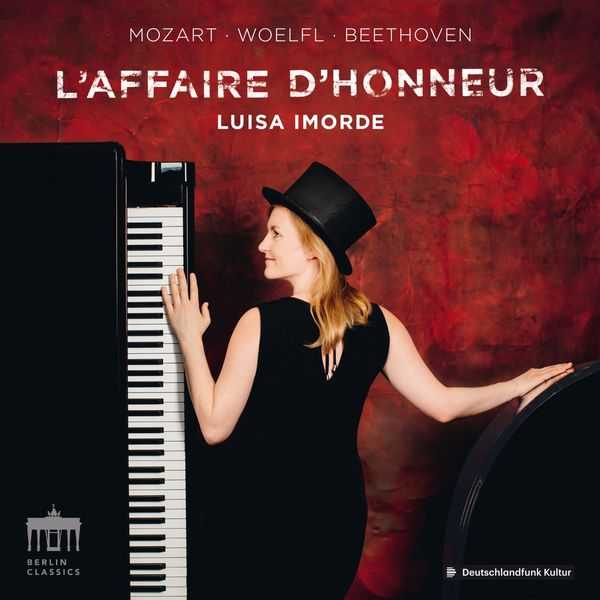 12. Beethoven: Variations in B-flat major on the duet ‘La stessa, la stessissima’ from the opera Falstaff by Antonio Salieri, WoO 73

Vienna, winter of 1798. Two titans of the musical world encountered each other in a one of a kind duel. A musical trial of strength in front of a select audience, the objective of which was to choose the winner by the intensity of the applause.

At just 28 years old, Ludwig van Beethoven was already well known as a virtuoso of the piano-forte and master of improvisation. Beethoven’s opponent, 25-year-old Johann Joseph Baptist Woelfl from Salzburg, was a student of Leopold Mozart and no less successful in the local musical scene. Contemporary witness, Knight Ignaz von Seyfried, reported that in the end the decision had to remain open, who could possibly have chosen which of the two combatants deserved the palm of victory?

Exceptionally gifted pianist Luisa Imorde reawakens the spirit of this historic battle between the two musical geniuses on her new CD “L’Affaire d’honneur”. Like Beethoven, Imorde made her first musical steps in the surroundings of Bonn. By the age of seven, she had already performed on stage time and again. Now she has made Salzburg the centre of her work and life, like originally Mozart and Woelfl. Her first recording named “Zirkustänze” found high appraisal by the musical press and the public alike. Now she presents her second album. Mrs Imorde contrasts the variations of Woelfl and Beethoven over the same musical theme by Salieri “La stessa, la stessissima”, they open and finish this recording.

In addition to that, Mozart’s visionary Adagio and Fugue for two pianos, paved the way to the future. Jacques Rouvier, former teacher of Luisa Imorde at the University of Music Mozarteum, Salzburg, plays the second piano. Then follows Beethoven with his famous “Pathétique”. Contrasting to that, Woelfl, who in fact was a great admirer of Beethoven, takes over form and material of the “Pathétique” and tries to even surpass it in his Sonata in C minor.