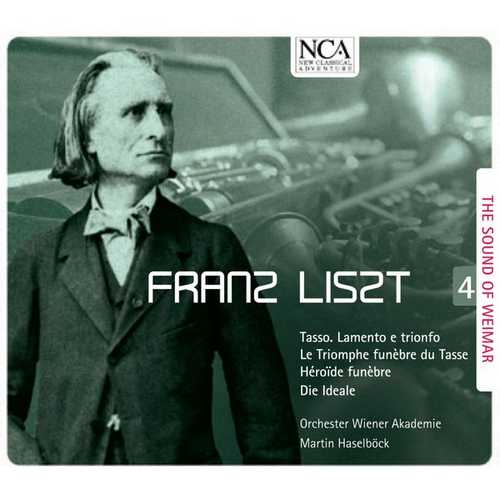 This is the fourth volume in the critically-acclaimed series “Liszt: The Sound of Weimar” which NCA is releasing as part of the celebrations to mark the 200th anniversary of the composer’s birth. These recordings are being made by the Vienna Academy Orchestra under its esteemed Austrian conductor Martin Haselböck and, as with the first three discs, the music is performed on original instruments from the 19th century. Included here are three more of the Symphonic Poems: No. 2 – Tasso, No. 8 – Héroïde funèbre, and No. 12 – Die Ideale, as well as the orchestral piece, Le Triomphe funèbre du Tasse.

The orchestral project “The Sound of Weimar” will include all the orchestral works of Franz Liszt in the original orchestration of the live premieres in Weimar. The recordings are taking place at the Austrian Liszt Raiding Centre, and will all be made at performances in seven concerts during 2011 and 2012 by the Vienna Academy Orchestra under the direction of Martin Haselböck. The first three CDs in the series were of the Dante Symphony (60234), released at the end of last year, and a disc which included the Symphonic Poems Les Preludes, Orpheus, and the Berg-Symphonie (60246). The third volume, released in March, featured Hunnenschlacht, Hungaria, and Mazeppa.