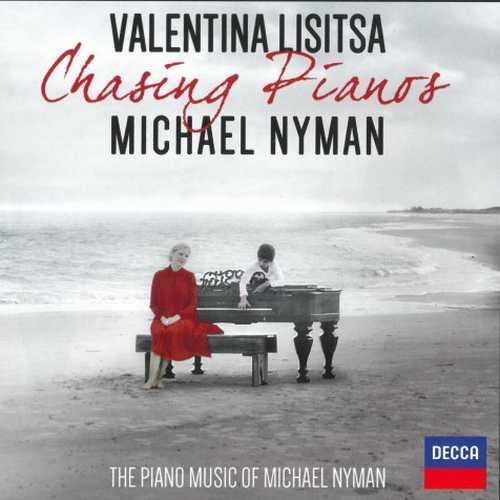 Ukrainian pianist Valentina Lisitsa has taken an unusual path toward career development: she posted her Chopin performances to YouTube, gained a strong following there, and then hired the London Symphony Orchestra for a set of Rachmaninov concerto performances. The gambit seems to be working: Lisitsa’s performances of late Romantic repertoire have been reasonably well received, and now she’s earned the right to implement what one imagines was the point of the whole exercise in the first place: the pursuit of the crossover audience centered above all in Britain. There is no denying that Chasing Pianos works well. British composer Michael Nyman has made a long specialty out of minimalist music that shades in the direction of melodic pop. Although Nyman has stated that opera is his favored genre, the style is ideally suited to film scores, and his music for The Piano (1993) is a classic of the genre. That score, adapted for solo piano, is heavily featured here, along with music from other scores that is artfully chosen to give just enough contrast to avoid sheer repetitiveness without disturbing the basic calm surface. Lisitsa’s style, flawlessly precise and slightly mechanical, fits this music in a rather eerie way, and fans of Nyman’s music will doubtless find a fresh and exciting take on it here. Those coming to the music from the film The Piano or from one of the other soundtracks represented should also be pleased. The sound, from the concert hall at Britain’s Wyastone Estate, is unusually well suited to the project: dreamy and soft without being overly gauzy.