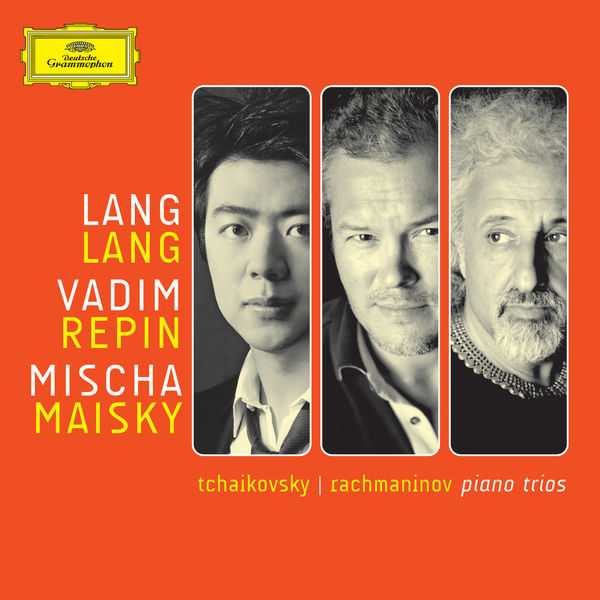 
01. Rachmaninov: Trio élégiaque No.1 in G minor for Piano, Violin and Cello

Lang Lang revisits two stellar exponents of Russia’s Romantic musical soul, Tchaikovsky and Rachmaninov, to reveal another side of his prodigious talent—his finesse as a collegial interpreter of chamber music.

Making the big news of Lang Lang‘s first ever chamber music recording bigger, joining him on the violin and cello are two giants of their instruments: Vadim Repin and Mischa Maisky. Lang Lang could not be in better company to reveal the inexhaustible inventiveness of Tchaikovsky’s Piano Trio No. 50 in A minor or the tender consolations of Rachmaninov’s Trio élégiaque in G-minor, a short early masterpiece composed before Rachmaninov was twenty.

Ideally, a piano trio should be balanced in its voices and the parts more or less equally matched in expression, but it sometimes happens in late Romantic chamber music that an overwrought piano part can create the opposite conditions. In the Trio élégiaque No. 1 in G minor by Sergey Rachmaninov and the Piano Trio in A minor by Pyotr Il’yich Tchaikovsky, the piano is clearly the dominant force, because it carries most of the thematic material, harmonic textures, and dramatic gestures, and thereby reduces the violin and cello to subsidiary roles. As one of the great virtuoso pianists, Rachmaninov undoubtedly planned that the pianist should be the leader and conceived this single-movement trio almost as a piano sonata with obbligato parts for the strings, while Tchaikovsky simply overwrote the keyboard part, and its density and complexity make the violin and cello seem like weaker participants. With these problems in mind, pianist Lang Lang, violinist Vadim Repin, and cellist Mischa Maisky adjust their parts to give greater prominence to the violin and cello, and the piano’s dynamics are taken down a bit to avoid overwhelming them. Moreover, careful microphone placement has given the strings the added presence they need to stand up to the keyboard, though Repin at times plays slightly softer than Maisky and occasionally seems to be slipping out of the audio field. Still, this ad hoc trio of Deutsche Grammophon stars seems to work well in this repertoire, given the challenges put before them, and fans of these musicians will find their passionate performances quite enjoyable.