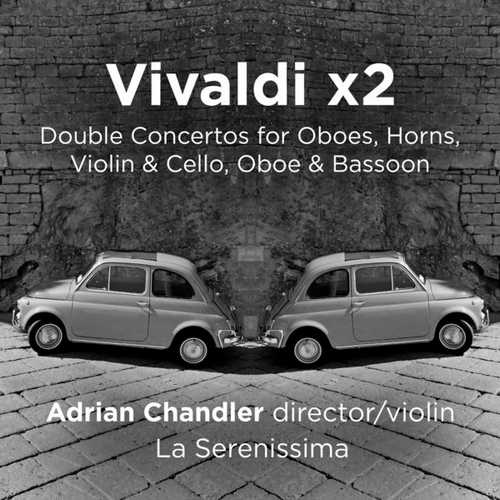 “My heart skipped a beat when [The Italian Job] from La Serenissima and Adrian Chandler landed on my desk, such was my enjoyment of their Gramophone Awards-shortlisted Vivaldi Four Seasons recording (AV2344). So to discover that with this all-Italian assortment of sinfonias and concertos they’ve actually topped their 2016 triumph – and apparently effortlessly – gives me no small amount of pleasure.” So said the reviewer of the Gramophone Award-winning release, and the Vivaldi specialists are set to triumph once again with Vivaldi x2, an astonishing medley of double concertos for hunting horns, oboes, bassoon, violin and cello. Emanating from Vivaldi’s pen the double concerto – a genre of which he all but cornered the market – resulted in some of the composer’s most colourful and exuberant works. In the hands of two-time Gramophone Award-winning La Serenissima, these concertos come to virtuosic and effervescent life.

Why the devil the cover of this superbe Vivaldi album sports a doctored photo of a car built in Torino between 1957 and 1975, whereas these double concertos were written around 250 years earlier for Venice, nobody knows. But the result remains a miracle, and a triple miracle too : first, that the recording could take place since it has been sponsored by crowdfunding ; second, that the instrumental quality of La Serenissima and the soloists is so exquisite ; and third, that Vivaldi wrote so many highly original double concertos, some of which for « odd » couples – oboe and bassoon, violin and cello etc. –, others for pairs such as two oboes, two horns (a great rarity in these times). The album, after half a dozen double concertos, ends with another rarity : the Concerto per S.A.S.I.S.P.G.M.D.G.S.M.B. – yes, that’s the very title given by Vivaldi himself. Far from being a simple double concerto, is is one for three duets – two horns, two oboes, violin-cello, plus an additional bassoon – in which the composer explores all imaginable arrangements between groups. Whoever said, a few decades ago, that Vivaldi had written the same lame concerto five hundred times again and again (yes, Mr Stravinsky, that’s you we’re talking about) had no idea of what was available in the Vivaldian treasure trove. Ah yes, and as for the cryptic title : the hypothesis per Sua Altezza Serenissima il Signor Principe Giuseppe Maria de’ Gonzaga (or else di Guastalla) Signor Moi Benignissimo seems at least credible…