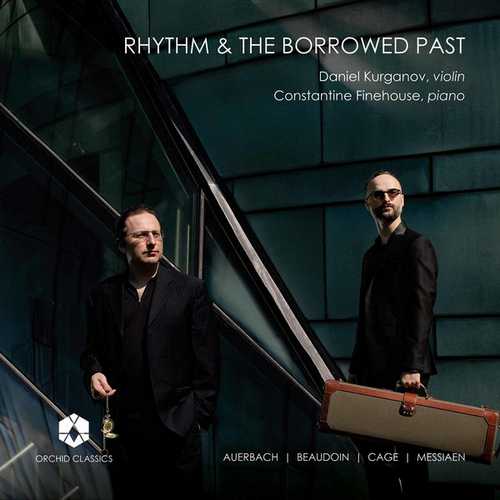 Soviet-born American Violinist Daniel Kurganov and Russian-American pianist Constantine Finehouse perform a stunning program of contemporary and 20th-century music by Lera Auerbach, Richard Beaudoin, John Cage and Olivier Messiaen. As Richard Beaudoin argues in his booklet notes, this program is characterized by the powerful sense of rhythm shared by these composers and the performers themselves.

Russian polymath Lera Auerbach uses rhythm in a rhetorical and unifying way in her dramatic Violin Sonata No. 3 (2005). Richard Beaudoin composed In höchster Not when he was a student of Michael Finnissy; during the work’s three contrapuntal movements the violin and piano are often independent, even out-of-sync. John Cage is known for his witty avant-garde experiments in sound and his Nocturne (1947) is written in fluid notation, allowing the performers considerable freedom in their interpretation so that every performance is truly unique. Olivier Messiaen’s rhythms were influenced by Indian music and are combined in his Thème et variations (1932), as with all his music, with a vivid sense of color.

Daniel Kurganov has been described in Fanfare Magazine as a musician of “smoldering intensity” with an “ingratiatingly idiomatic violinistic personality”.