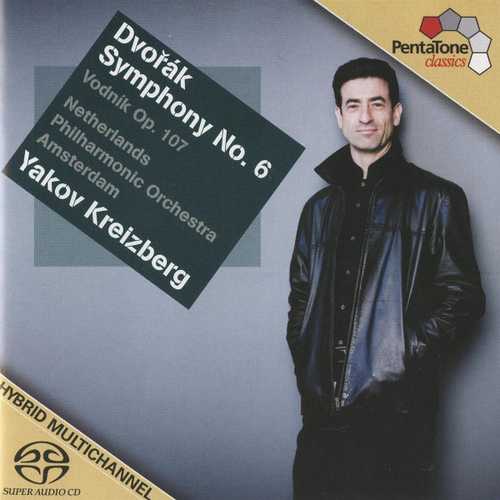 Joining Yakov Kreizberg and the Netherlands Philharmonic Orchestra’s previously released recordings of Dvorák’s Eighth and Ninth symphonies is a recording of the same composer’s Sixth Symphony coupled with his symphonic poem The Water Goblin. Like its predecessors, it is simply superb. Kreizberg’s conducting has plenty of drive and power, but it’s also well-shaped and completely under control. He’s able to sculpt phrases and paragraphs without impeding the forward motion of the music, and the work’s radiant lyricism is as apparent in its serene central Adagio as it is in its racing closing Allegro con spirito. The Amsterdam-based orchestra plays with tremendous strength and integrity for Kreizberg, sticking with him in the symphony’s brutal Scherzo and shining for him in the symphonic poem’s more lurid passages. Although there have been many other superlative recordings of Dvorák’s Sixth over the years — the luminous Kertész, the ebullient Belohlávek, the gregarious Mackerras — Kreizberg’s deserves to be heard by anyone who loves the music. PentaTone’s super audio sound is deep, clear, detailed, and unaccountably present.